I start my morning with Hive Mind setting the ambiance while I am scrolling my IG. A few likes and a few laughs here and there, and then I stumble over a post that peaks my interest. The post is speaking on what the legendary sneaker store Solebox did at their flagship location in Berlin for the Nike Pieter Parra Air Max 1 release. In attempts to deter resellers, Solebox had a strict wear out policy on this release. Something that I have honestly never seen or heard of in my time in the sneaker world, but can definitely say I appreciated. Solebox required the buyers to wear the shoes before they left the store if they wanted the entire packaging or leave the box with the store and just take the shoes. This is an immediate shot to the market value to flip. The shoes would now go from Deadstock to Very Near Deadstock or worn once, while also just to come with its original box and packaging or be not have those contents at all. What we got in return for this new process from Solebox was pure internet gold.

As seen above the result was pure comedy. We have resellers standing on the heel of a shoe because it is not their size. We have some scrambling literally right outside of the store to re-lace and clean the shoes to make them appear brand new again. Honestly, it may be the most cringe worthy thing I have seen in a while. These are adults who have been thrown in to a panic due to a last minute change by a retailer. Think about it. They had their potential buyers already, most likely guaranteeing pairs of a certain quality, and Solebox just threw an entire wrench in that. There was a post by KingOfTrainers where he features the photo and speaks to the lack of savvy by the buyers that day, being so distraught that they immediately went outside of the store and not somewhere out of sight to clean, re-lace, and reshape the pairs. Another thing he spoke on was not normally seeing the actual sellers camping in the lines, normally this being done by a runner or a placeholder. This in all honesty just makes the pictures that much more hilarious if you ask me. Just imagine being one of those placeholders who was given a couple of bucks to wait and pick up these pairs. You get there get this information and now you have to explain why these shoes are not as expected to the person that paid you to pick them up. What I will say is Solebox may be on to something. 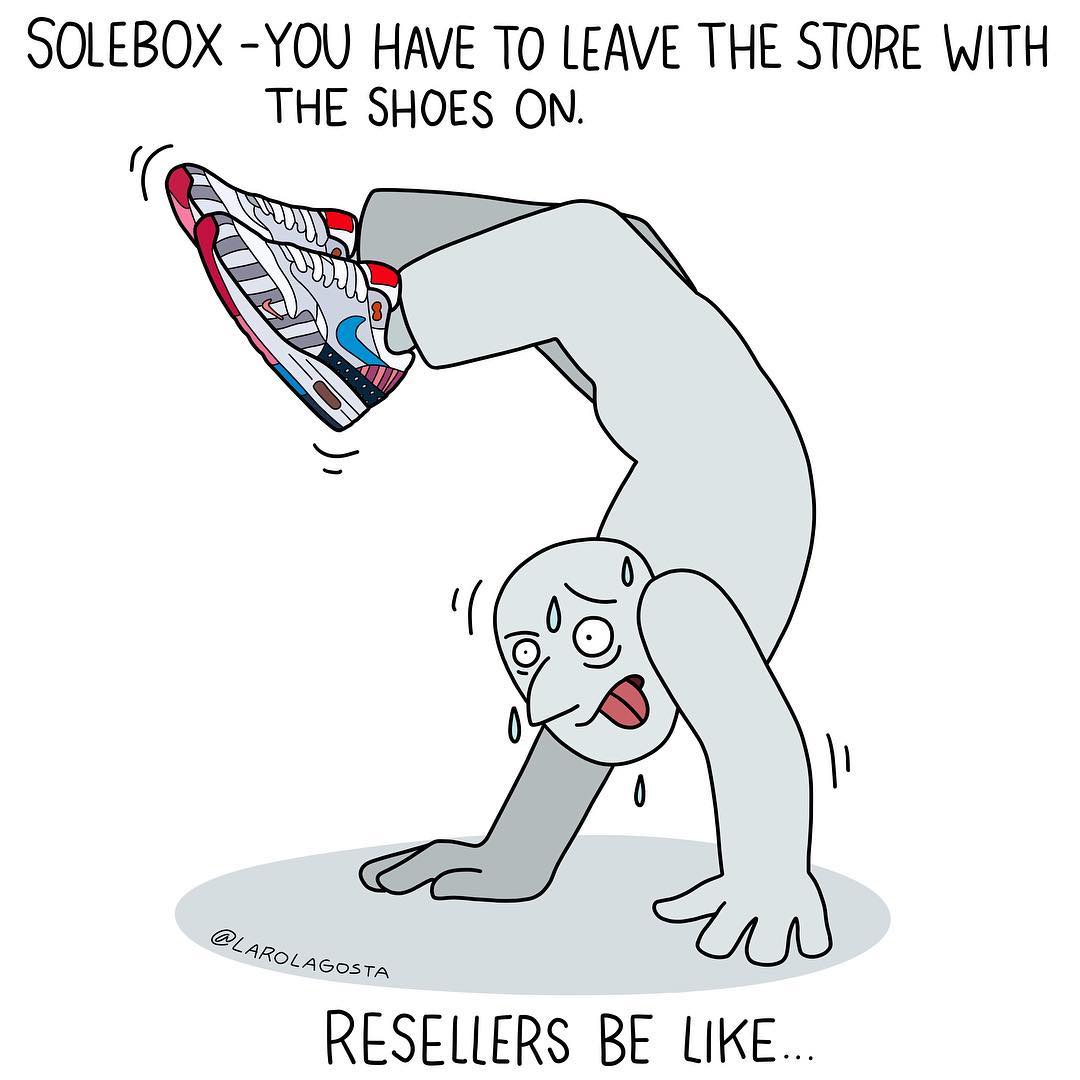 We have spoken for years on practices that have made in store purchasing hell. In fact, these were concerns prior to bots and ATC services. Things like backdoor selling, and inaccurate inventory skewing have always been a thing. I mean, I got lied to about a launch just a couple of weeks ago; and only realized it due to the variety of questions I asked the person working there. I am far from saying this is the actual answer to reselling either. However, maybe it’s a roadblock? It definitely is something that would reduce the value of many pairs on the market due to moving from new, to tried on, to lightly worn, to worn once. This would challenge resellers to become far more clever than they are today. I have to now put myself in those shoes just for purposes of a full-sided piece (no pun intended). And honestly, I don’t ever go straight to foot with the shoes I have. Being straight with you, in the rare cases I do purchase in store, I am actually insulted when someone asks me if I need to try them on. (I have worn the same size shoe since 8th grade). My way around this would be sending a runner with a far smaller foot to pick up the pair. This would most likely decrease the wear on the pairs due to not filling the entire shoe. Look at me helping the cause of a practice I am not necessarily a fan of.

How do you feel about this? Do you think it’s a process many stores, boutiques, and retailers should pick up? Resellers, how do you think this would affect you return? Let us know and stay locked in for all of your sneaker news here.

Written By
Contributor
More from Contributor
Origins of perfumery, the art of perfume-making can be found in ancient...
Read More