Ask anyone that’s into sneakers and they’ll tell you their love and affinity started during childhood. Often, it’s that same child in them that keeps them so enthusiastic about sneakers as they get older. That child like attraction mixed with a bit of nostalgia (which I will address in another piece) is what drives a significant portion of the sneaker culture. This is why we tend to see such success with brands diving into their respective vaults and bringing back classic models in their original and new renditions. These new renditions are actually what I want to speak on in this piece. This year we have some releases that speak to the kid in many sneaker enthusiasts as well as some kids today, so let’s break that down.

Theme based sneakers have always been some of my personal favorites when executed properly. To take something and detail it on to a sneaker where it can be accentuated and portrayed in so many ways, just normally screams “take my money now”. I’m sure I’m not the only one that feels this way either. Especially given that the majority of these releases tend sell out rather quickly. Now I can understand how a select few can speak to these and say it’s just a gimmick, but as mentioned I’m not really speaking to those, I’m speaking to those pairs that you know you must have.

2018 seems to be one of the years for those must have pickups as far as niche themes go. This year has given us multiple animation based themes, and definitely here for it. This isn’t something that’s brand new and haven’t seen before though. Some years back Bait and Asics released a slew of cartoon/comic/animation themed sneakers, and they were dope to say the least. It’s the same thing with many other brands throughout the years as well. But, what we having going on this year may be some of my favorites among any that’ve come out. It’s most likely due to me being a 90’s kid. And with that, what we are getting this year is really hitting home with me. This year we are getting some of the most popular animations of the 90’s era being applied to dope silhouettes. 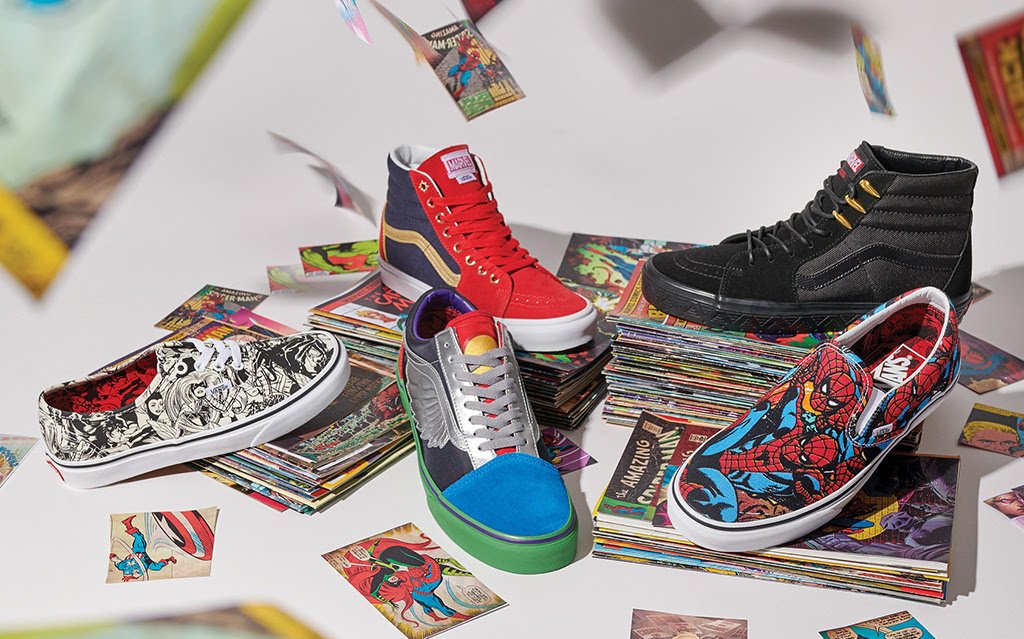 Adidas, Vans, and Puma are doing big things this year. As many of you know Adidas is taking what’s been recognized as the Greatest Anime of all time and releasing an entire line based on our favorite characters. Throughout the year we will be getting multiple silhouettes from Adidas themed around Dragon Ball Z, that will range in model to showcase each character. Vans is in the process of bringing us a major Marvel collection centered around some of the most popular heroes of today as well. The line has pairs from Black Panther, Deadpool, Captain Marvel and many more, with some real gems in the collaboration. Vans is also ranging models, materials, and approaches to bring out the best in the collection. Puma may actually have my favorite individual release of the brand though. I don’t care, I’m bias and grew up as a Genesis kid. So for Puma to be releasing a Sonic and Dr. Robotnik pack, I’m definitely planning on getting my hands on them.

Each collection contains nods and small details to their inspirations, and the execution is truly elite level. As mentioned the Vans and Puma releases are floating around now, with greater availability soon. Adidas on the other hand will be spreading out this launch through this year with many of us eager to see more detailed looks at the DBZ collaboration. One thing for certain we’ll make sure to keep you all updated on what’s next and what’s best.

VINTAGE FLOWS: Tis the Foodie Season to be Jolly

No Church in the Wild