When you think David Beckham, chances are you think: 1) Shirtless, 2) Soccer, and 3) Victoria Beckham. In many ways, the common associations that break down his character are right—Beckham is undeniably an attractive man whose official website davidbeckham.com literally is a blown-up black and white photo opt of him without a shirt, he ended his soccer career with a collection of 19 major trophies, and his wife is the former Spice Girl who is always poised, camera-ready, and well…“posh.”

Still, there is more than meets the eye surrounding the athlete’s life. Although he retired as of May 2013, the superstar has been making his mark in the media and across continents for the past year, proving that he is not just a household name in sports, but an ultimate guys’ guy who you wouldn’t mind pulling up a chair next to.

Let us count the new reasons to love Becks: 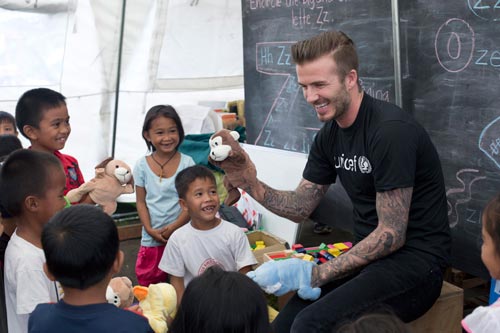 Beckham was given the title “goodwill ambassador” of UNICEF in 2005, and remains an active contributor; he visited the Philippines in February 2014 to aid children affected by Typhoon Haiyan and filmed a video appeal to help children facing emergencies around the world, including Syria and the Congo. You can visit the video appeal here.

In June 2014, Prince William named Beckham lead ambassador of United for Wildlife, the global alliance aimed to bring awareness to illegal wildlife trade, poaching, and demand for products such as ivory.

Most recently, on September 3rd Beckham’s Facebook highlighted his support of the Invictus Games, an international sporting event for wounded, injured, and sick servicemen and women.

His sense of adventure and exploration.

On June 9, the BBC1 film David Beckham into the Unknown was released in the UK, a travelogue documenting Beckham’s journey through the Amazon rainforest by way of motorcycle. He was accompanied by two male friends, Derek White and Dave Gardner.

In an interview presented by adidas and KickTV, Rio, he states, “The [Yanomami] tribes don’t even know about football…you know you give them a football and they have no clue what to do with it. And I think that’s what was special, you know, about the trip. . .having to explain football to them. . .it was a whole new experience.”

In addition, Beckham says that the Yanomami had never heard of him before. This, for a busy man who played professional soccer for 22 years and retired at the ripe age of 39, seems to be a breath of fresh air to Becks when he remarks, “It was an amazing experience to walk into somewhere as a normal person.”

His debut fashion collection, Beckham for Belstaff, boasts nine pieces in the British heritage brand of luxury sportswear and biker gear. Beckham himself says that the line reflects the clothes he wears “day in and day out.” The collection is inspired by vintage looks as far back as the 60’s and 70’s, with materials Belstaff says first allowed people “freedom and daring” 1924.

If you’re not into the motorcycle jacket, check out Beckham’s Adidas Predator Lethal Zone cleats, described by Pro Direct Soccer as offering “the perfect balance between lightweight and stability.” Beckham proudly talks about his lifelong love for the Adidas Predator and was directly involved in the design of the eye-catching pink model, which can be personalized with your name and soccer number.

Beckham was even honored enough by Adidas to have a celebratory pair of sneaks made for his retirement in the Great Britain colors of red, white, and blue. A nice sentimental touch: apparently, all Beckham cleats feature wife Victoria’s initials and the names of his four children— Brooklyn, Romeo, Cruz, and Harper—on the heel. Aww! 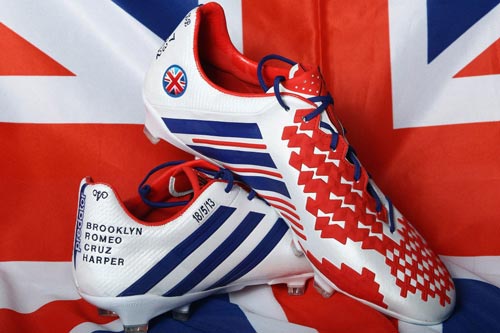 Now, don’t you feel inspired to “bend it like Beckham”?

123 thoughts on “3 Reasons Why We Love David Beckham”