The enchanting fashion icon, Zang Toi presents his S/S 2015 collection during this weeks’ New York Fashion Week at Lincoln Center. Not only was it a celebration to see all his wonderful designs but it was also a celebration for his 25th year. Many came out for his anniversary show including stars like Ivana Trump, Whoopy Goldberg, Julie Macklowe, Vincent de Paul, Nigel Barker and wife Cristen Barker.

Toi named his anniversary collection, “A Privileged Life: The American Dream”, as he showcased what is to come to us for the spring season. Accompanied by the sounds of Lana Del Ray’s “National Anthem”, Lenny Kravitz’s “American Woman”, Ray Charles’s “America the Beautiful” and Neil Diamond’s “Coming to America” these songs couldn’t have been a better pick to compliment the show itself in total. Starting off on the runway, with designs of red and white stripes for both men and women models, Toi definitely showed his patriotism of the American dream. Other pieces that stood out from the collection where his long dresses in hues of purple, black, white and emerald but we also can’t forget the motorcycle vest!

Starting at the young at of 18, Toi moved from his native country Malaysia and found his was to New York a year later, pursuing his love for fashion at the Parsons School of Design followed by the opening of his atelier, House of Toi. He has since then been able to capture the hearts of many with his consistent drive to give his best. For the past 25 years we have seen Toi work wonders and the proper celebration for all he has done was well deserved.

As the show came to an end, photographer Richard Renda from Totally Cool grabbed the designer and walked him down the runway, surprising him with an anniversary cake as everyone else joined in to sign happy anniversary.

Happy anniversary Zang Toi! We can’t wait to see what else you have in store for us during future seasons. 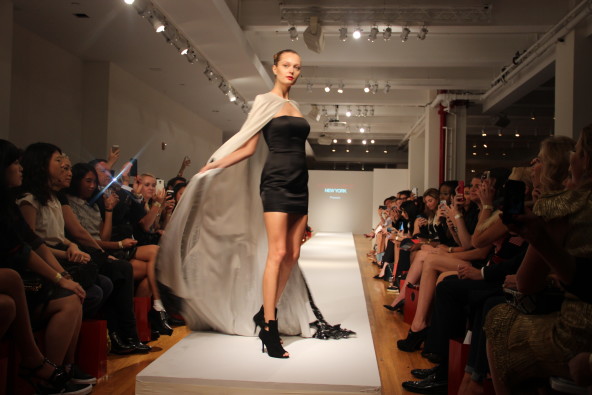