Even at first glance, the caliber of the Audi R8 is plain to see. The car sits broad and squat on the road, the strongly accentuated rear end appearing to flex its muscles like a sprinter ready for the off.

The characteristic proportions of the vehicle are dictated by the location of the engine behind the cockpit. This layout is a typical feature of race cars. One of the most striking examples of this design – and as such one of the legitimate antecedents of the Audi R8 – was, and still is, the Auto Union Type C Grand Prix car. The central position of the engine is above all a boon to driving dynamics, as it allows for a weight distribution, as on the R8, of 44 percent to the front and 56 percent to the rear.

The car’s body is highly compact in appearance. The front end and the gently curved roof arc are drawn in a sweeping line; a line which immediately marks the two-seater out as an Audi. 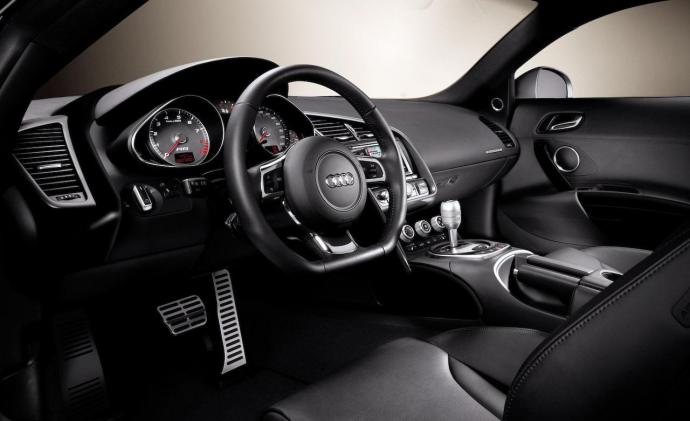 The side view also reveals familiar contours. The dynamic line above the wheel arches and the shoulder line interlink the front end, side and rear, imbue the doors and the transition to the side air vent with a strong presence, and even more emphatically highlight the typical Audi rounded wheel housings accommodating the big wheels.

The cabin of the Audi R8 is pushed far forward – a typical feature of a mid-engined sports car, and as such a visual cue linking it to the race car of the same name. Behind the cabin, positioned in front of the rear axle, is the V8 FSI engine, a sculptured piece of engineering visible both through the large, shield-shaped rear window and from inside the car.

The full aluminum body is constructed in the Audi Space Frame (ASF) design. Its perfect synthesis of minimal weight and maximum rigidity provides the ideal foundation for optimum driving dynamics, as well as delivering an outstanding power-to-weight ratio of just 8.18 pounds per bhp.