It was the Treaty of Versailles that changed the face of BMW. Up until the end of World War 1, BMW was a manufacturer of aircraft engines. Its famous blue and white circular badge, which is said to represent aircraft propellers in motion, being a reminder of the company’s past.Â The fact that the logo actually derives from the colours of the flag of Bavaria, and was used a good 12 years before BMW began to build aircraft engines, has done nothing to interfere with the popular myth. When the German Air Force was disbanded and outlawed after the war, BMW had to turn its attentions elsewhere to put bread on the table. After briefly flirting with the manufacturer of agricultural machinery and even office furniture, they began building motorcycles. At that time, the chief designer was a man named Max Friz, who was responsible for the famous Boxer engines, the first of which was based on a British Douglas design.In 1923, the R32 was born, which was to become the basis of future Boxer powered BMW’s. This motorcycle used the shaft drive system which would feature in all BMW motorcycles up until 1994. BMW motorcycles were to prove invaluable in North Africa during World War 2. Not having a chain that could clog with sand, they were so successful that Harley-Davidson were requested by the US military, to copy the machine, which they duly did and produced the Harley-Davidson XA. With the German war machine insatiable for motorcycles, the company flourished during the war years, but as Germany’s fortunes declined, so did BMW’s. Its Munich factory was razed to the ground by bombing and after the war the Russians dismantled the Eisenach plant and re-assembled it in Irbit. Not only that, but the cream of their engineers were taken to Russia or the USA to work on jet engines research. As the restriction on motorcycle production was eased, BMW had to go back to basics. None of the old plans had survived, so the engineers were forced to use pre-war motorcycles as a template for their new machines. The bike that came off the production line was the R24, which incidentally had no rear suspension.In 1949 over 9,000 R24′s were built, a figure which rose to more than 17,000 by 1950. The R68, a sports motorcycle was introduced in 1952. This 594cc machine was to become something of a collector’s piece, as less than 1,500 were produced. The 1950′s saw a downturn in motorcycle demand. This period saw a reduction in output from 30,000 units to less than 6,000 by 1957. By the late 50′s the vast majority of BMW motorcycles were being exported to the USA, Butler and Smith inc. having the sole distribution rights, but although American sales were strong, the company was struggling to survive. With the financial help of Herbert Quandt and the blossoming automobile division, BMW pulled through, and in 1959, cementing it’s American reputation, John Prenton rode a BMW R69 from New York to Los Angeles in 53 hours and 11 minutes, and in doing so, shaved over 22 hours off the existing record. The R27, the last of the single cylinder models was introduced in 1967. 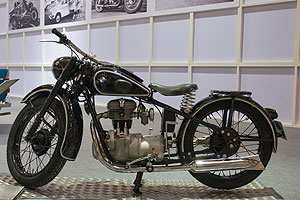 Times were changing and the public demanded different machines, and so BMW’s were built, not with Sidecars in mind, but sporty performance. In 1970 the company introduced an entirely re-vamped range of motorcycles; the R50/5, the R60/5 and the R75/5. In 1974 the 500cc model was removed from the catalogue and replaced with a 900cc bike. In 1975 the R90S was introduced and soon earned the tag of the best ‘Supersports’ motorcycle of its day. 1977 saw the arrival of the first one litre engined motorcycles from BMW.

This year also welcomed the first ‘Full Fairing’ to a BMW machine. In 1978 the R100T was thrown into the ring to compete with Honda’s Goldwing. 1986 brought the world’s first electrically adjusted windscreen on the K100LT, which at first seemed a little eccentric, but is now used on various BMW models and has in fact been copied by Honda, Yamaha and Kawasaki. It was BMW who in 1988 introduced ABS to the motorcycle world when it became standard on all their K models, the R1100S acquiring it in 1993. It is now fitted to almost all the company’s shaft driven bikes. Despite the near demise of the company after World War 2, the company has risen to be unquestionably one of the finest motorcycle manufacturers in the world.

Written By
Dre Dynasty
More from Dre Dynasty
It is not only the first Ferrari with four-wheel drive, but, more...
Read More