Cries of “No justice; no peace,” and “Hands up; don’t shoot” have been the mantra of protesters in Ferguson, Mo. ever since the shooting of Michael Brown on Aug. 9.

The first one is the most traditional protest chant in the wake of racially charged cases, and has been for decades. Philosophically, it makes perfect sense. Any society that abandons the pursuit of justice or selectively applies it cannot have peace because it has mismanaged the delicate balance between peace and mayhem. Without true justice, there can be no true peace. Is this philosophical understanding in play in Ferguson or have the protesters and activists hijacked the terms “justice” and “peace” according to conclusions they reached long before all the evidence has been collected and Officer Darren Wilson has had his day in court?

Perhaps the answer to that question can be found in the second protest cry: “Hands up; don’t shoot.” While eyewitness accounts differ with regard to the actual altercation between Wilson and Brown, the one that has become most widely accepted is that Michael Brown had his hands raised in surrender and Officer Wilson simply shot him down in cold blood. Other witness accounts suggest that Brown may have lunged back at Wilson in a threatening manor prompting the gunfire and new evidence is now emerging that officer Wilson had a serious wound to the face after his initial confrontation with Brown at the patrol car. In the midst of the various details that have come out in the days since the shooting, some of the real meaty information may be getting swept under the rug because of the hasty conclusions reached by an angry populace… information that may be critical if true justice is the goal.

Even major, widely trusted media outlets appear to have sacrificed journalistic integrity in light of public outcry. A  New York Times report from Aug. 19 explained in some detail how stories varied over some aspects of the shooting with only a fleeting mention of what a majority of witnesses claim happened. Apparently there are widely collaborative eyewitness accounts that Officer Wilson’s gun fired during the initial altercation at the car prompting Michael Brown to run away while the police officer continued to shoot. Accounts differ as to what happened next, but it seems that either Michael Brown stopped, turned and raised his hands in surrender (the view embraced by public opinion) or he stopped, turned around and lunged at the officer in a threatening way prompting him to shoot the unarmed teen dead.

The Times missed the real story here. If Officer Wilson was shooting at Michael Brown as he was running away, that is a crime and most witnesses appear to agree that this is what happened. They didn’t take that ball and run with it, opting to focus on the parts of the story that are more ambiguous but have been the focus of public outcry. While Lawrence O’Donnell on MSNBC pointed this out, he called it lazy journalism. Perhaps, but there’s a real chance that it was overlooked intentionally to support the conclusions already drawn by the protesters and activists. If that’s true, it’s not laziness; it’s cowardice. Either way it’s irresponsible and has repercussions beyond media coverage alone.

If the media can be swayed to miss something this important, the implications for the investigation and subsequent prosecution are enormous. Will this case be shaped by something with strong collaborative evidence or by something the public wants but may not have sufficient evidence to support? While it’s unlikely that shooting and killing Michael Brown was a necessary action taken by Officer Wilson, it’s important that the public opinion sway of the media not carry over into the investigation or prosecution. 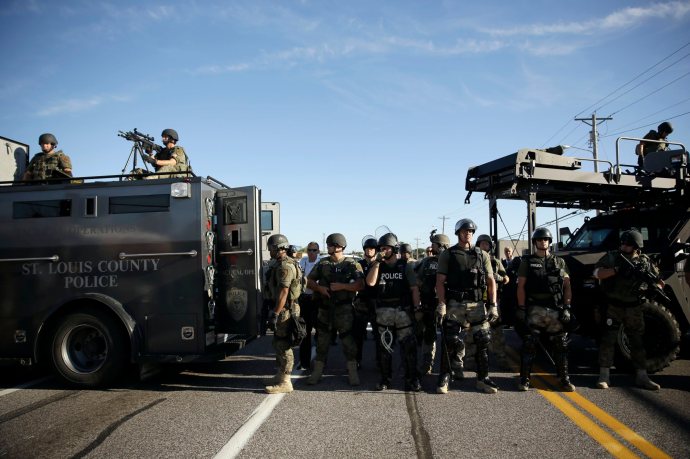 Excessive and unnecessary force is in question here and the police in Ferguson and the authorities in Missouri have strengthened the case against Officer Wilson by their response to the situation. From the police use of military-grade vehicles and tear gas to quiet the protesters and enforce curfews to the governor calling on the National Guard for help, it’s harder and harder for the community to believe that Officer Wilson isn’t guilty of using unnecessary deadly force when the very police department to which he belongs hauls out the heavy artillery and the governor sends in the troops. Governor Nixon and the Ferguson Police Department are clearly rookies in the race game and they’re up against seasoned professionals like the Rev. Al Sharpton and the NAACP. None of this advances the cause of justice. Although all this serves to make Darren Wilson guilty by association, it is nonetheless important that he be found guilty by supporting evidence. If the public influence continues on its current path, that may not happen.

No one can argue that there have been tensions between the African American community and law enforcement for years in cities across the country. Police and community leaders need to address these issues and work together to find solutions and a means by which police and citizenry are mutually respected.

This isn’t happening in Ferguson. Justice has been defined by the protesters and activists. Officer Wilson is guilty of murdering Michael Brown and should be arrested and convicted of that crime. Period. It doesn’t matter if Officer Wilson is afforded his due process. It doesn’t matter what other evidence is presented in court. That may ultimately be true, but if Wilson is not convicted and jailed for murdering Michael Brown, it may be because the public pushed the prosecution away from the stronger case that couldn’t stand up under evidential scrutiny. The stronger evidence may support that Officer Wilson used unnecessary deadly force when he fired at a fleeing suspect than that he simply gunned down an innocent, unarmed young man who was attempting to surrender. The second approach may drum up stronger feelings, but the support for it is weak.

If the prosecution barks up the same tree as the activists and the media, an acquittal is more likely than if they pursue the more obvious path to a conviction. If the case falls apart on its own merits there will be no “justice” by anyone’s standard.  At that point, the cry of “no peace” becomes no longer a philosophical consequence of an unjust system, it becomes a threat from an angry mob. God help Ferguson if that happens.

59 thoughts on “Did The New York Times Purposely Leave Out Details About Ferguson?”