I was in attendance of the closing party of the art exhibition “1 plus 1 plus 1” (i.e. – Klash Won plus Sam Woolley plus TTK = three artists – one show) at the White Rabbit at 145 East Houston. DJ Susan Z. Anthony graciously extended an invitation to the show (where she was spinning) and to whom I am extending a big thank you!  Also a big thank you to Chevon Drew, who produced the show and was an incredibly gracious host.  It was great to be able to speak to the artists during the closing party, when things were all winding down.  During its run, the show had attracted notables such as Ricky Powell, Big Daddy Kane, Large Professor, Meyhem Lauren, DJ TJ Mizell, etc.

The show itself drew on 1985 – 1995 hip-hop themes and pop culture – Star Wars, Polo, Nintendo, Newport, Patrick Ewing, hip hop artists, etc. – elements that were used in the works of the “1 plus 1 plus 1” collective as symbols, a language and an aesthetic insular to the people who lived that world at that time.Focusing on TTK’s piece about a guy reaching for a green Super Mario Bros. mushroom, to anyone who has played Super Mario as a kid on an 8 bit Nintendo, that image of the mushroom immediately draws you in with the familiar. However, it is not random placement, TTK definitely has an angle in his work and is definitely using this imagery to speak to a specific and limited audience, to irreverent disregard and exclusion of all others.  If you never played Super Mario Brothers, you just wouldn’t get that the green mushroom is the 1-up extra life mushroom (a very rare occurrence and often a difficult achievement in the game itself).  Within the painting, an attempt to be born again, the subject reaching for that second life a second chance, a wish fulfillment.  The guy who just fucked up his life, and just reaching for a 1-up mushroom. 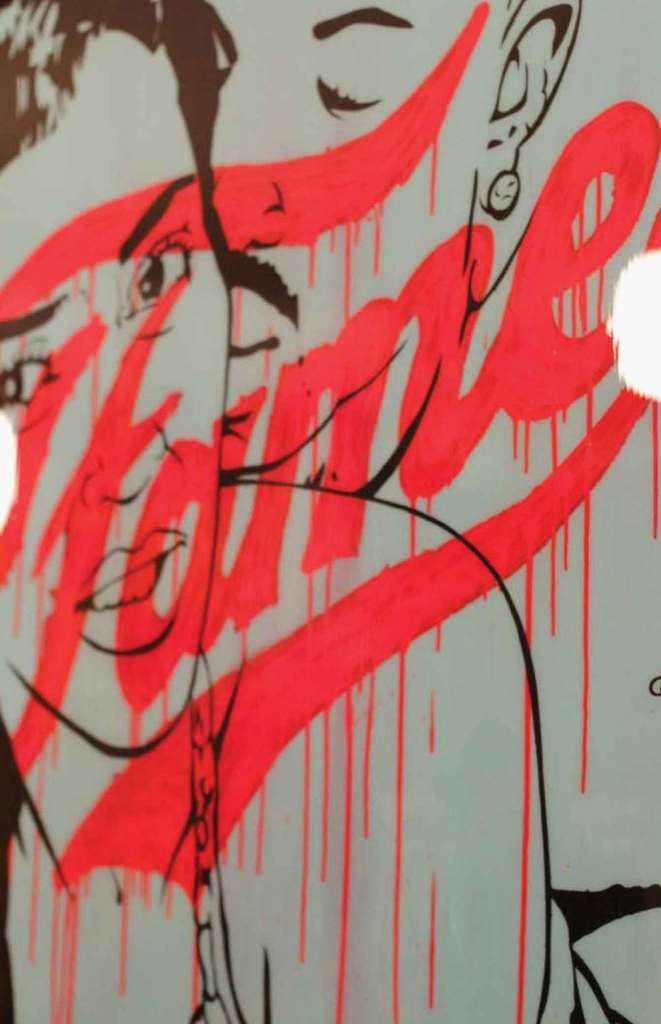 Sam Woolley’s paintings are instantly distinguishable by their characteristic glazed finish – exposing the dark side of notoriety but still putting a “shiny finish” on the negativity that can come with fame. One piece, prominently displayed at the show, features Kim Kardashian in the throes of passion with Ray J. (during their infamous sex tape) with “Fame” written across it – a reference to the 1982 show of the same name.  Obviously, TV in the 80‘s told kids they had to go to LaGuardia High School and work their asses off to hone their craft before they can become famous, whereas today, reality shows tell kids they could just shoot porn for their claim to fame.  Clearly, Woolley’s message would be lost to anyone not old enough to remember the show.

The iconographer of this show was Klash Won – blending colors and playing with shadows to create portraits of Nas, Big Daddy Kane and Biz Markie.  Klash Won was quick to point out, with pride, of a piece of his son hanging prominently next to the portraits of the hip hop legends.  I had to ask (almost apologetically, but I needed to ask) why he chose to include a portrait of his son in the show – his answer, its all about bringing this art, this aesthetic to his son, spending time connecting and listening to old records.  The way that Klash Won was speaking (at length) about his boy, its clear that Klash Won made these paintings so that on some level he can almost make his son ask him “hey dad, who is that guy you painted?”

While using a similar aesthetic, the three artists played a variation on a theme with regard to material success and fame which can be corrupting, subversive and fleeting.   As an aside, I thoroughly enjoyed the show, NYC is truly a small world, bumped into an old friend, met new friends of friends, listened to great music, lots of fun with good people – it’s not where you are at, its who you are with.