Jason Christopher Peters has been in the fashion industry for thirteen years to date. With modeling and designing under his belt there are so many wonderful things that he has encountered and even more wonderful things coming his way.

His passion all began around the sweet age of 3 when he first started sketching dress designs with crayons and paper. The inspiration came to him after watching award shows and pageants like Miss America and Teen USA with his grandma-adoptive mom, Dolores Mae Peters. She has, as well as his grandfather, been the biggest influence for his interest in fashion since his early years.

While sketching was one of the first things he did when he was a young boy for fun, the designer today, started his career into the fashion world as a model. The exposure has been endless, opening many doors as well as opportunities that he is not only blessed for but humbled by. He shares with us why he loves modeling so much, “When I am walking in runway shows or being photographed for magazines an entirely different side of me comes out! It’s like this, there’s Kanye and then there’s Kanye West; Beyonce and Sasha Fierce. I enjoy playing all different types of characters as a model; it’s kind of like therapy, I guess you could call it fashion therapy?” If it’s really called fashion therapy or something else all that’s known is that we absolutely love it!

As the character transformations happen with every show, personas come out of models that were either unknown or hidden but whatever it might be when they do come to life it is something great. For many it can lead to bigger opportunities within the modeling field or just like Peters it can open doors that involves designing. Since his first fashion show in November of 2001 his career as a designer took off and it looks like there is no way of stopping him. 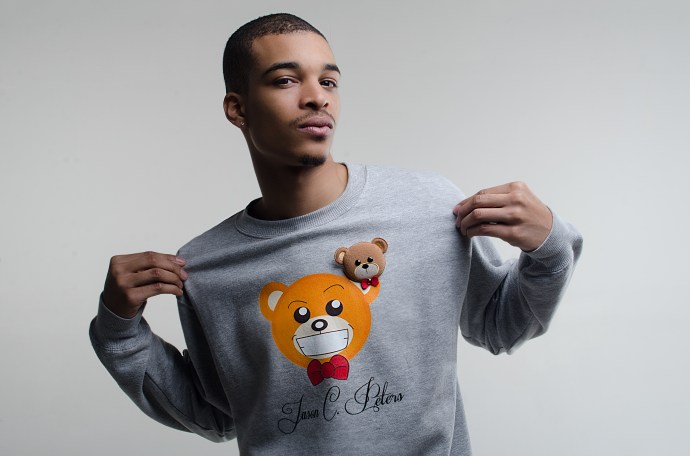 He has showcased his designs during NY fashion week at Esco Club which was a success with an amazing audience to add to the eventful night. The models for this show came out to Miley Cyrus’s “FU” featuring French Montana to go with the theme of “no matter what people think of you we are all beautiful and equal in every respect; sometimes you just have to say “FU” to people”, as Peters describes. A tribute was also given to controversial subjects like Michelle Obama’s letter to Kanye West painted on one of the male models’ body, another one with a photo of an openly gay couple Kordale and Kaleb from Atlanta, GA with their beautiful children and the female models walked down the runway with awesome makeup with their eyes closed. All of this couldn’t have been possible without his team of makeup artist Diana Marguiles, body paint illustrator Maurice and hair by Hair and The City and Lynne Schilling. Talk about an empowering show!

As his empowerment grows his inspiration continues evolving for his work as it comes from everything, and although he is heavily influenced by Japanese, Greek and Portuguese cultures currently, he can’t ever forget about his bear pins. That’s what it all comes back to for any of his lines of clothing and illustrations; as he calls it “bear mania”. They were first created for himself, when he wanted to make some accessories but after wearing it out during NYFW people started going crazy for them. It became something that he had to make happen for others to have. “I want everyone to feel good and have their inner happiness glow while they are wearing the pins”, says Peters.

So what’s next for this talented, ambitious, amazing model and designer you might wonder? Never in his life would he have imagined to be modeling and designing for 13 years but he’s taking it by force and doing it. He has just debuted his men’s line at the Zicana Gallery this past February, a women’s and men’s ready to wear line, a baby line, his “People Like Us” Fashion Tour soon to be launched around the US and the works of a kids and maternity line by Fall 2014, the possibilities are honestly endless. We’ll all just have to excitedly wait and see what else he has in store for the world.