I hate reality television. No, really I do. Which is an interesting statement to start an article with regarding someone from reality television, but hear me out. The problem with reality television is that it isn’t real. It’s scripted, prepped, and ultimately coached into existence. Sure we’ve had Survivor and The Real World, but since then, the realest content we’ve had was a movie called The Truman Show. I have been on sets of shows, and have walked away with anything but praise for the ‘creative content’ that is administered to the general public. Less and less rich content is watched by the average consumer, with millions of people tuning in every week to see what Kim Kardashian is up to this week, or the next. Not to say I have an issue with the Kardashians, or any of their ilk, as they have a successful business model that works. But how many come into television land, already on the rise? Rarely does it happen. Rarely are they Lilly Ghalichi. 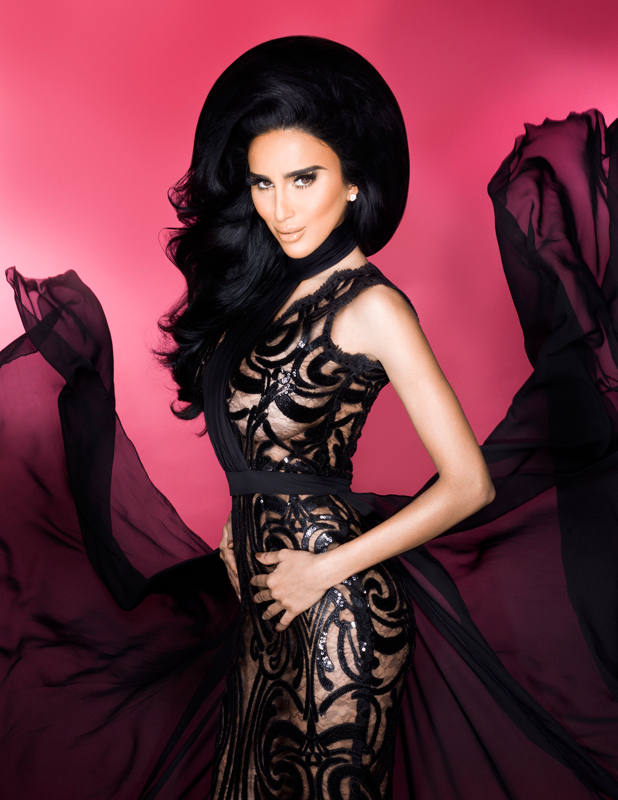 Lilly delved into her upbringing candidly with me, discussing her Persian roots, and how no one in Texas knew what Iran or a Persian was. She was rarely bullied, but fit in well with a various amount of minorities, who she molded well with. Her parents taught her an incredible amount of values, which whet her appetite in business (starting her successful swimgerie line a few years back). I am not going to lie, I had a ton of misconceptions, until she had a great show at this year’s Spring NYFW. She couldn’t be farther away from the usual Beverly Hills type. “I like big hair, big books, and big steaks! Everything in Texas is instilled in me and I feel so fortunate to have grown up there [Texas]”, Lilly started enthusiastically. Having spent a good amount of time in the South (New Orleans), I really couldn’t agree more. Being raised in the South has a certain air to it, generally showcasing a more laid back, family based environment. It is an interesting note that Lilly was not raised in the Hollywood, with infinity pools and Nobu dinners. You hear it in her voice right away, as she is incredibly personable to talk to. She gushes as she talks about “growing up surrounded by fields, go-karts, dirt bikes, tee pees, bonfires, and cow tipping”. Shocking to think that this female we all learned of on The Shahs of Sunset, is not some haughty air head. Actually, the interesting thing is that Lilly went to McCombs School of Business AND Loyola Law School. Those aren’t online courses, but distinguished schools of business and law. You don’t get into institutions as such by merely smiling and winking at a camera. Hard work and humbling dedication are the basis of such success.

“I see so many women that are too scared to pursue their dreams because they don’t have enough confidence”, she tells me, and she is right. As we coast through 2015, we have to admit that this is not a ‘man’s world’ anymore. Sadly, there is still a lack of confidence that stagnates many females, especially those of minority descent. As this issue is slowly dissipating, we see a growing divide leading to equality. With that said, Lilly is heading the charge, especially with the rise of her brand. Nowadays we have Ghalichi Glam, which encompasses anything and everything fashion. No really. She has Lilly Lashes, Lilly Hair, Want My Look, Doggy Glam, Avitan, AND Glampagne. That is only the tip of her empire’s iceberg. There are tutorials, editorials, and classes ongoing, with a low monthly membership free, and so much more to come. Hearing her discuss all this really engulfed me in the female accessory market, which has only grown ten fold over the past 5 years. Now, this isn’t something that is ripe with Valentino, Jimmy Choo, or even Givenchy. Want My Look brings out some of the greatest ensembles and fashion forward items that the average person can shop, and ultimately buy. This is where the genius in her business model lies; the average consumer. She isn’t hawking her wares to the elite, but to everyone, as a whole. This not only widens her market, but makes her a household name. This is important in a time where brands come and go (look at Michael Kors or even Coach). Establishing a connection to the consumer on a seasonal basis is key, and promoting affordable make up options is even more instrumental to success. You would expect this sort of open mindedness from someone of her pedigree.

The real question is, how in the world does she fit into something like The Shahs of Sunset? The show highlights the rich of the rich in Beverly Hills, all of Persian descent. In essence, like most reality television, it is a farce, usually downplayed by most of those who are Persian, or even Arab (the amount of “so do you watch that sho-” I have gotten from people is frustrating). Surprisingly she turned it down the first time she was approached.

“I was actually asked to be on the first season but I politely declined because the thought of being on a reality show was not exciting to me. Especially being on a show where everyone was the same race because it was so “Jersey Shore” to me. They reproached me when they were going to start filming the second season, so I watched the first season and I didn’t think it was that bad. It was definitely a far stretch from Jersey Shore, so I decided from the brand and business perspective that it would be a really smart decision because you cannot buy that kind of advertising. You’re not only exposing your life, but your exposing your life in a way that interest people and that is very valuable to an entrepreneur who has something to sell.”

The decision to include yourself on a show to really herald your brand is genius, because she is a 100% right, where else can you get that kind of advertising? Nowhere. All that being said, she still quit after the first day on set, but came back and finished her season out, calling it a “great experience”. This ultimately helped give Ghalichi Glam the push it needed, becoming the go to spot of make up tutorials, and bolstering Lilly’s following into the millions.

But she has left time for relationships, coming into Shahs with her long time boyfriend/fiancée Ali, and recently ending things with Dhar. It is interesting to see the difference in her reaction to both. Ali was someone she was with since she was 19, and still remains good friends with. They were both hustlers, and his drive pushed her to be the best she can be. Yet, as we grow we change, and he didn’t. Nothing wrong there, as that is the nature of life and love. “I’m going to seem like a heartless bitch but I think I was sad for like an hour”, she talks about when it came to Dhar. She understood the concept that life goes on, and crying over it was not going to change that. That is more than just a sign of maturity, but one of growing up. Yet, she isn’t ruling out another guy in the future, just getting the right guy to fit in her schedule might be a bit tough. Lilly does see family and love as treasures of life, not just add-ons to be taken for granted. This is exhibited in her closeness to her sister Yassi, and how even though she is an entertainment maven, she is still close to her family.

So, maybe we should look past misconceptions of individuals in the limelight, especially those on television. Lilly is right, it is beyond just scripted television; you really are exposing yourself to the world. What you do with that fame is the most important thing, and becoming a role model is the most resolute. Lilly Ghalichi has a long and successful career ahead of her – one that I reckon (that’s for Texas) will encompass much more than Shahs of Sunset, and even Ghalichi Glam. Watch out world, Miss Texas is here to stay.