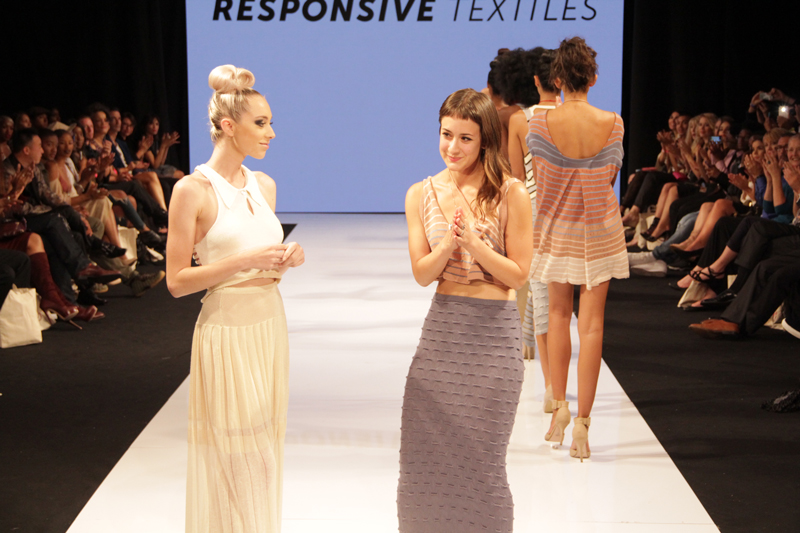 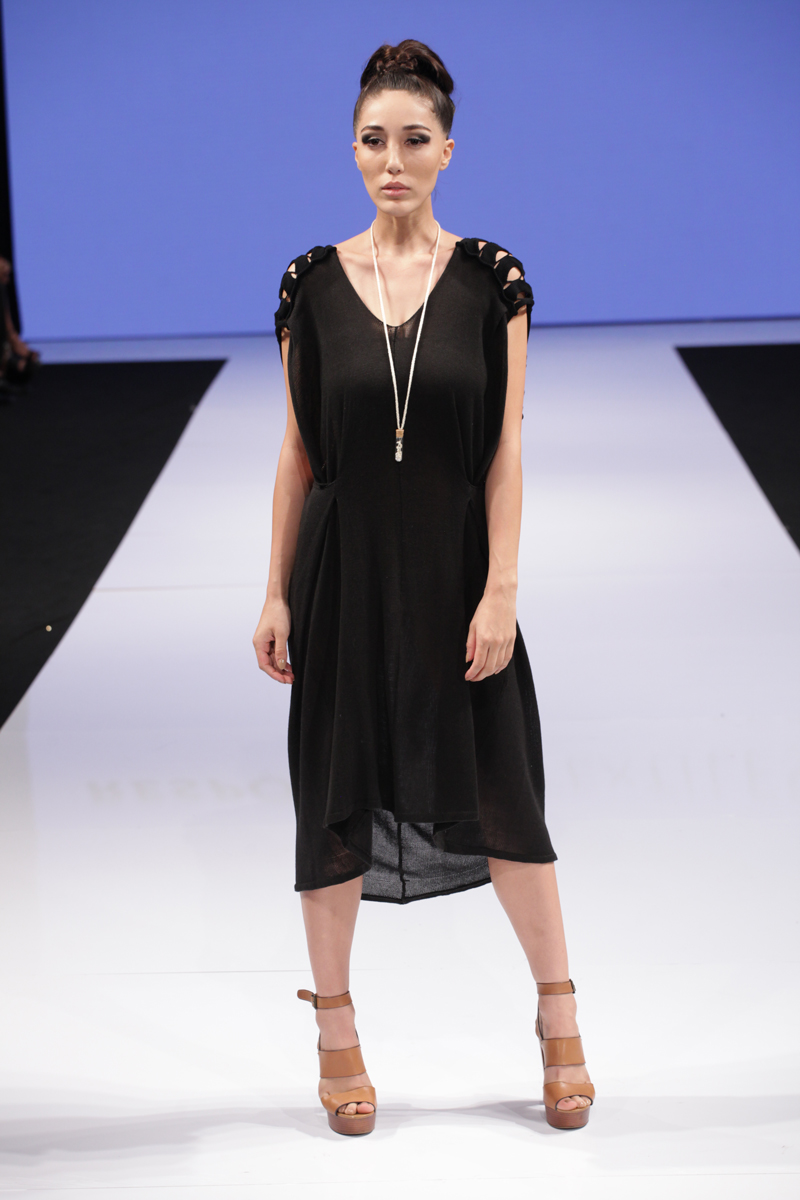 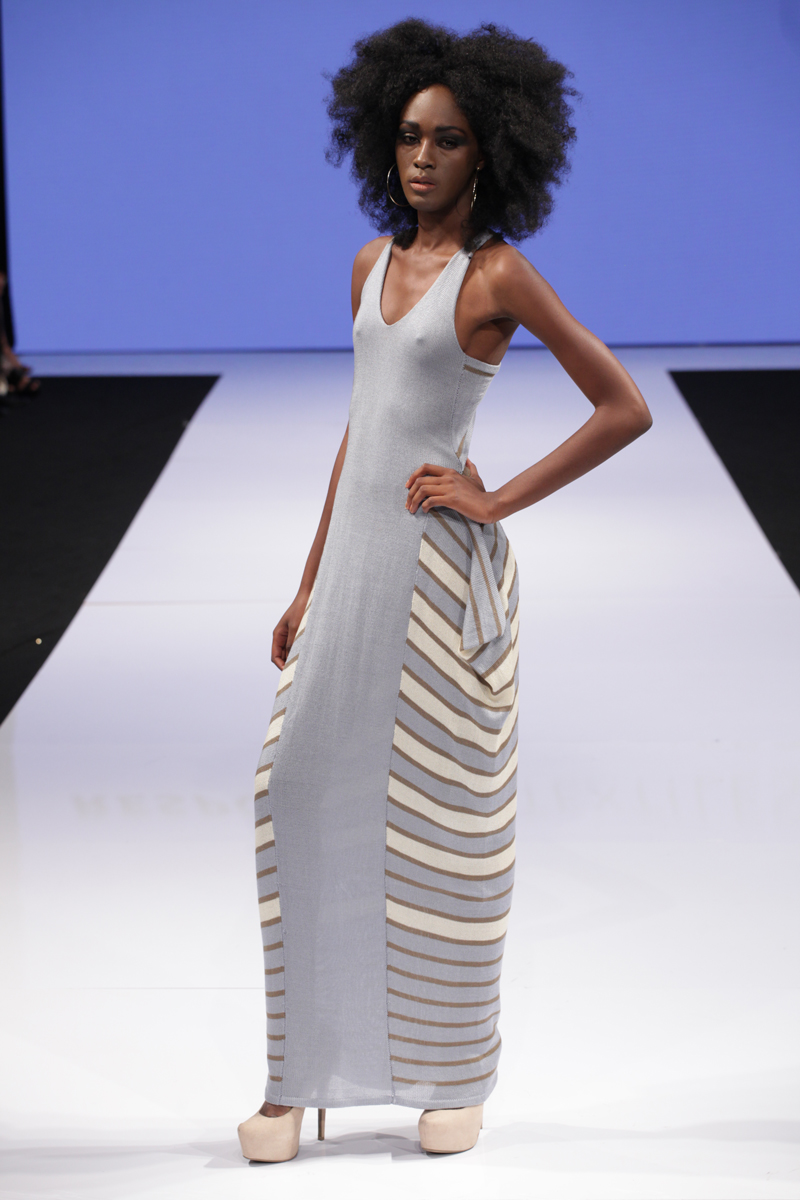 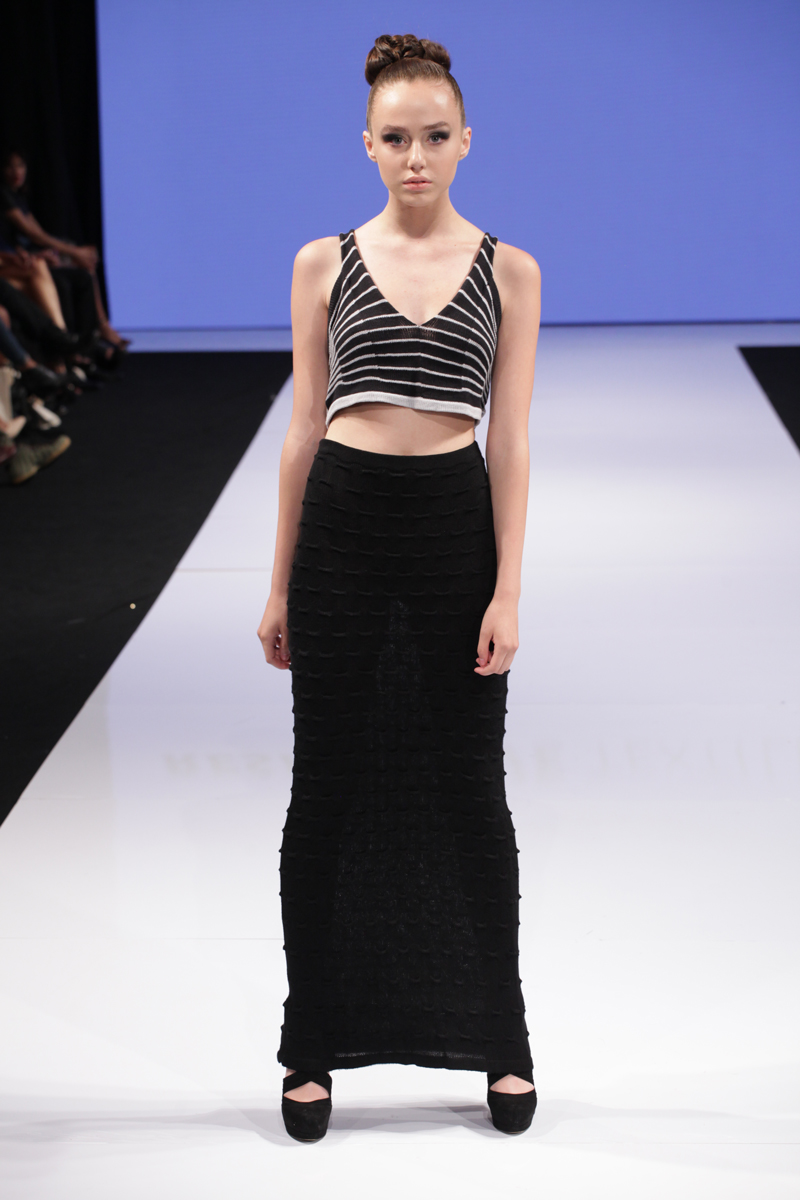 When it comes to innovation and hands on designs, this designer certainly makes her way to the top of the list. Kristine Rodriguez’s knitwear is something that is not only amazing in its creation but also the shapes and forms she’s able to construct her garments into. All of her pieces are completely hand crafted all the way to the looming of the fabric. Rodriguez’s knitwear is all spun by hand so she has complete freedom to which ever color, style or pattern she would like for her next collection. The collection that she showed at this year’s fashion week was named The Revival Series. The show begins with bold black and white garments resembling the body’s skeletal frame. And then you move into a few strong red pieces playing off the idea of the mythical phoenix. Rodriguez then phases out her show with soft nudes and ending with angelic whites reflecting the soul and becoming stronger than once before. What wowed me about the entire show was the shapes she was able to construct with knits and a loom. Her garments consisted of floor length pencil skirts that had spotted texture, cut outs in her dresses, different slits and v cut backs on her tops, pleating on some of the skirts and tops also. Her line reminded me of a wearer that wants to stay comfortable and seem as if they didn’t want to try hard, yet, they are the best dressed in the room due to the detail, uniqueness and construction of their look. Responsive Textiles is an amazing brand, totally wearable for the everyday woman. It’s very feminine with just the right touch of edge and creativity! 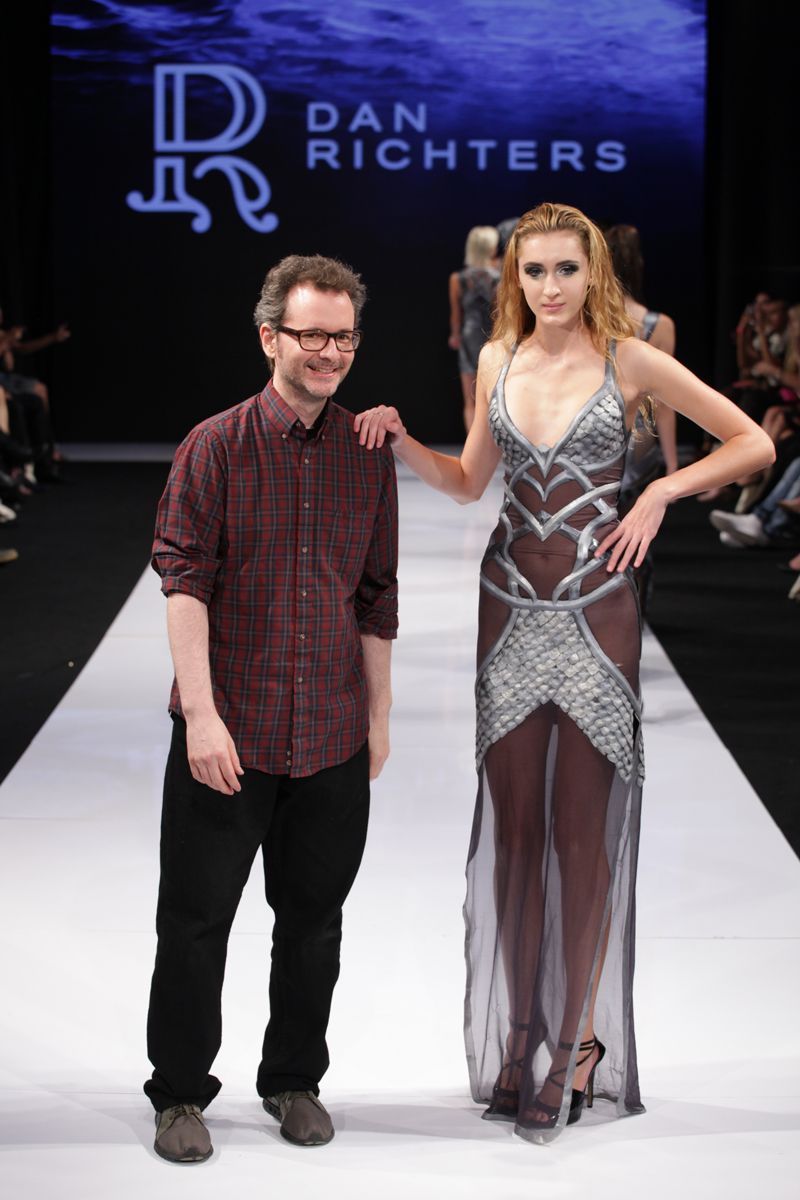 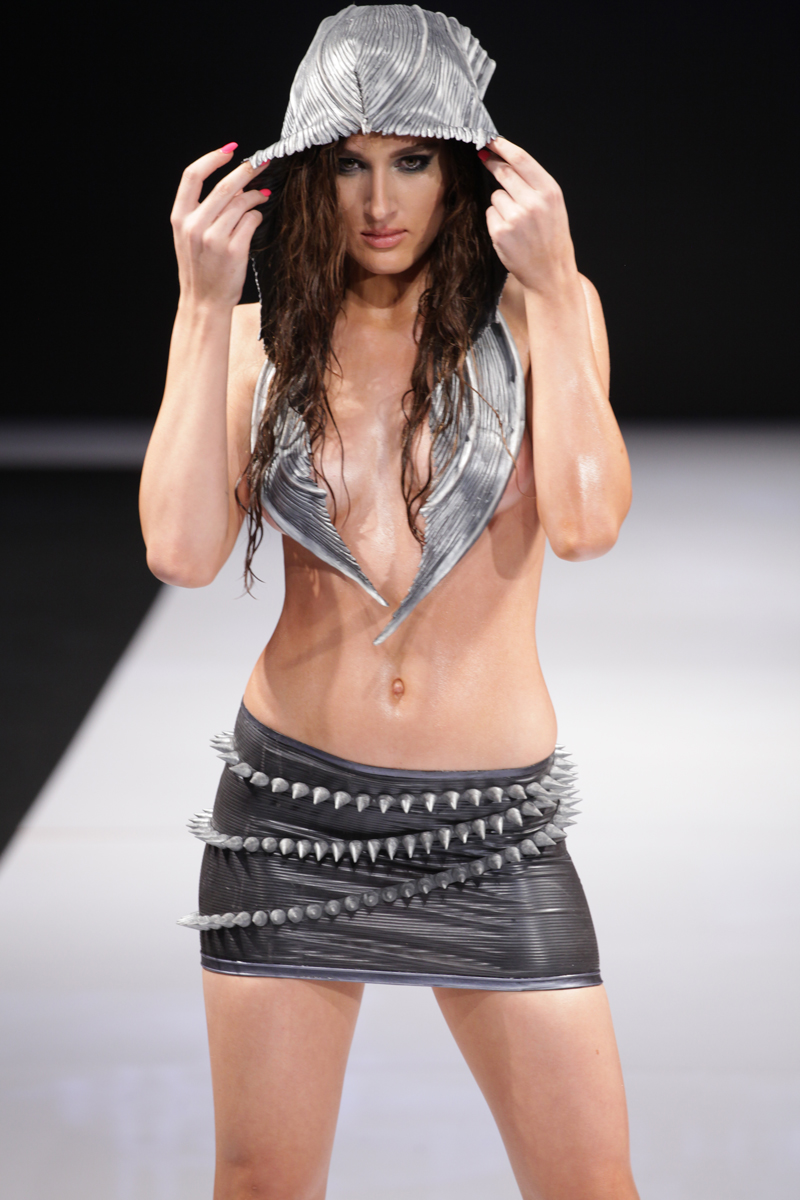 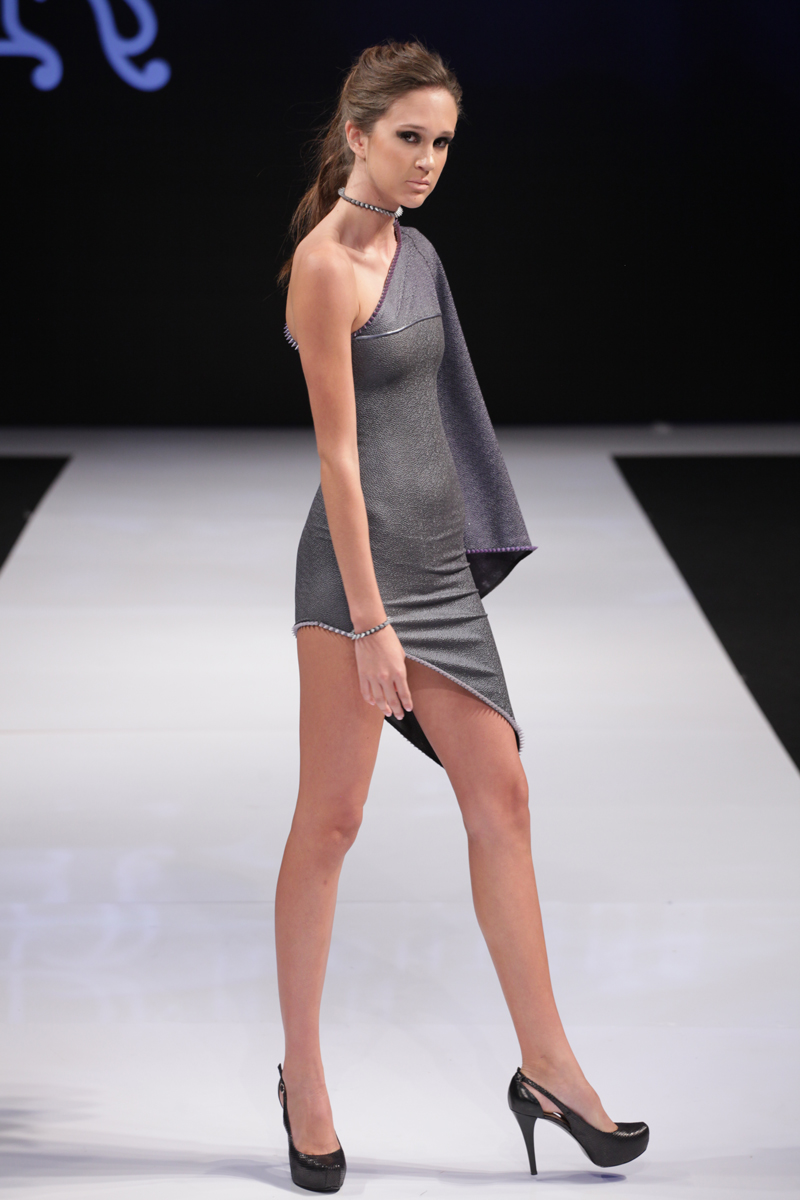 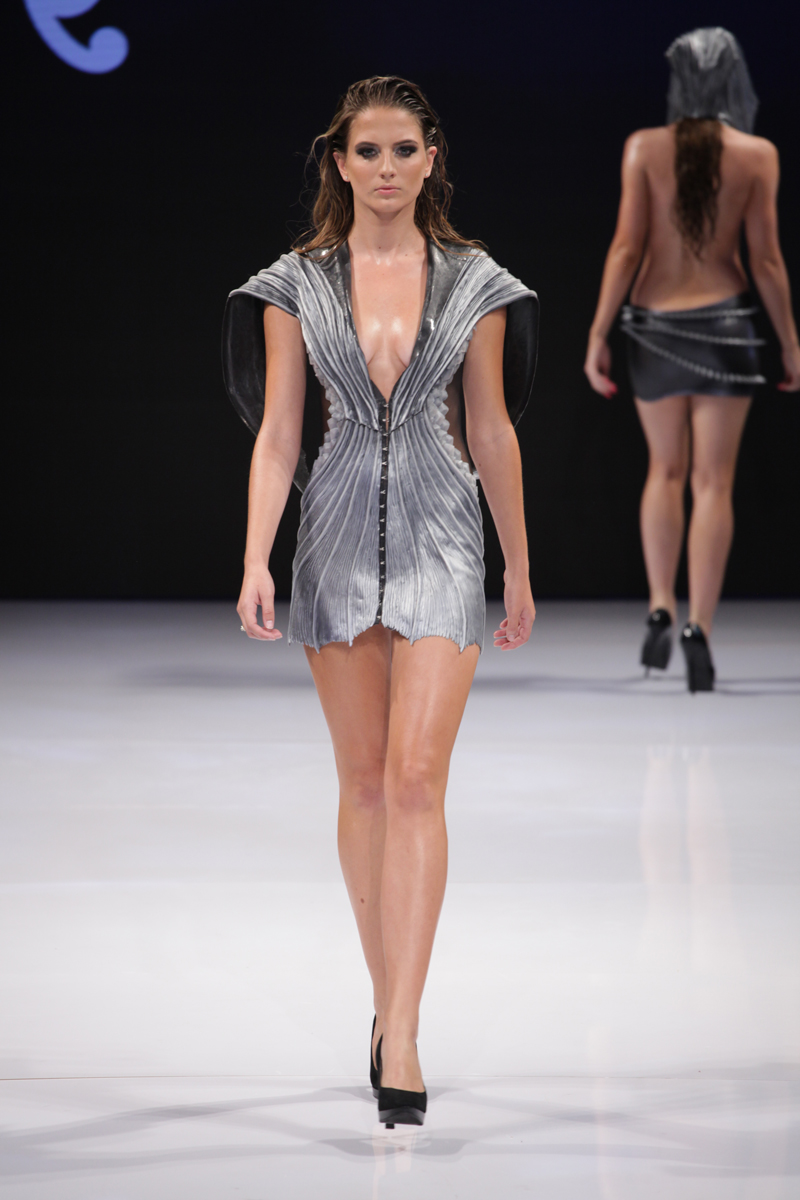 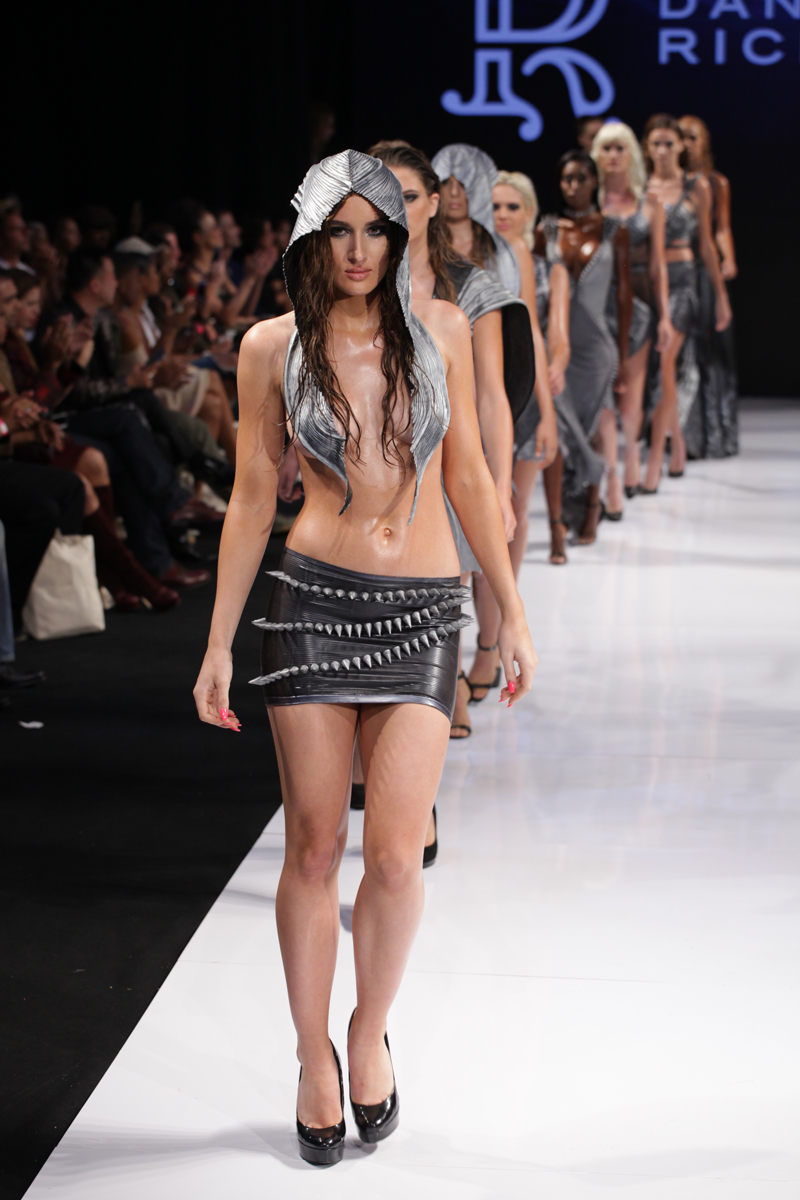 Sticking to very creative and innovated designers, Dan Richters was another designer that had me on the edge of me seat throughout the entire show. I find Richters to be a true artist rather than just a designer and this is why. His collection titled Benthic went along the lines of an aquatic life form, similar to mermaids but a little darker and edgier. In his lookbook, he quotes; “I am fascinated with the ocean- particularly the ocean floor. The textures and the shapes found in this collection reflect benthic life. If there is a people that reside there, I image these are their garments.” The collection was a steel grey scale. The models walked down the runway appearing to have just crowed out of the ocean, hair wet and body misted. The garments were all hand molded silicon that took shapes as long dress, short mini body suits, two piece sets and fin-like headdresses. It was absolutely gorgeous. The texture of each piece was mouth dropping. Each garment consisted of layers of either scales, spikes, or fins. The garments hugged the models to perfection and moved so gracefully that I had no idea that the collection was constructed out of silicon until after the show and I was able to get up close to one of the models and admire the amazing molds. Between the silicon, Richters placed really fine mesh fabric for implied cut outs and darker shadows under the silvery fins and textured layers. Each piece had exposed hook and eye closures that added to the edge appeal of the collection. True artistry at its finest and a great take to a well planned out and constructed collection.

How The Democratic Presidential Candidates Are Holding Up

LAFW: The Best Of The Best