It’s been awhile since I’ve experimented with beer, and with National Beer Day today it’s only appropriate to check out some new breweries. Of course this being A.D.M.G, I’m adding a bit of a twist. Instead of just highlighting one beer, we are going to take a look at four beers from four different breweries. It’s like a smorgasbord of brewskies. Now here’s the kicker. Not only are they different beers, but the selected options are also countries considered to produce the best beer in the world. Although, I don’t write about beer often, let’s be clear its one of my favorite beverages. For one, It’s the best option in any scenario. It’s relatively inexpensive and is the back bone to any party. It reminds me of my college days where stale basements and kegs of Keystone were king. Ah, those were the days, sigh. Those days foregone, nowadays it’s all about craft beers and the occasional Corona. This leads to why I enjoy exploring interesting brands.

Our first stop of the beer world tour leads us to the U.K and Samuel Smith’s Brewery. Due to beers often being similar in taste and consistency, I needed to include an odd ball to the bunch. This is why I purchased Samuel Smith’s Organic Chocolate Stout. To start, what is a stout? It’s a dark beer roasted with malt or barley.  Obviously what stands out is that it’s brewed with organic cocoa and everyone loves chocolate. I have to admit though, this isn’t my first take of this delicious brew. I’ve had it in passing and thought, “Everyone needs to know this great product of Samuel Smith”. This is for the beer drinker who likes to venture a bit. This beer has a slightly thick consistency, which may deter a few, but trust me it’s a premium option that’s worth trying at least once. If a beer like Guinness is what you are in to this is for you. Just take away the super malty flavor and replace it with the lusciousness of chocolate.

Zeit, ein deutsches Bier zu probieren! Hard to say right? Well that’s German for, “time to taste some beer”. No I don’t know German, but hell I wanted to start off by saying something dope, especially since our next stop is Germany. Besides 1,000 different kinds of sausage and having one of the most recognizable cars of all-time (VW Bug), Germany has over 1,000 different types of beers. Crazy right? Our next beer is from German brewery Franziskaner. I enjoyed their Spaten Franziskaner Bräu. It’s more of your traditional beer. It has a taste profile that includes citrus, grapes and banana. It’s has an interesting profile and is a quality weissbier (wheat beer). This brewery has been around since 1363, so obviously they are producing a great product. A beer that comes to mind when drinking this, is Yuenling Beer. It’s one of those types of beer that you purchase when you’re just kicking back and watching the game.

Our next country, Belgium is not only known for waffles, chocolate and Brussel Sprouts. It is known to have some of the best beer in the world. In fact it produces over 2,000 different types of beer. Primarily having an abundance of ales, I tend to enjoy Saisons. That being said, I chose to pickup a Belgian I.P.A. The choice at hand is Houblon Chouffe from Achouffe Brewery. I’ve mentioned in the past that, that I.P.A.’s aren’t one of my favorite styles of beers because they are hoppy. I have to admit though that this one is enjoyable. It has a zesty fruit flavor which made me forget how much I dislike I.P.A.’s. This is one of those beers made to pair with food. So guess what I did? I paired it with a nice two pound Tomahawk steak! That worked out perfectly with the robust flavor of the I.P.A. at hand.

Time to bring this one on home. The final beer on our beer world tour is made right here in the good ol’ U.S. of A. We all know beer is deeply engrained in our culture. As I mentioned before it’s the backbone of the party. From barbeques to weddings, it’s everywhere. Here we taste, Tröegs Brewing Company’s Nugget Nectar Ale and Dream Weaver Wheat Beer. Looking for a couple options, I picked up these beers not only to taste but to experiment as A.D.M.G always does First let’s talk a bit about the beers themselves. The Nugget Nectar Ale is a I.P.A. which by now we don’t really need to discuss what that is. This was another pleasant surprise for me. Either my opinion on I.P.A.’s are changing or I’ve secretly had an affinity for them all along. Nugget Nectar Ale was extremely pleasant. It’s aroma was true to other I.P.A.’s with is hoppy flavor. Besides the piney taste there was a flavor I couldn’t quite figure out but it turns out that it’s mango. As for Tröges Dream Weaver Beer, this was my favorite out of the two. As a huge fan of wheat beer, I found Dream Weaver to be satiating. The flavors that were most prominent were lemon and bananas, but I could also taste some pepper as well. 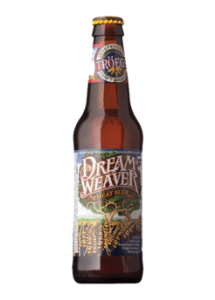 That concludes the beer world tour, but I’m not done. I can’t have this lot of beer and not experiment a bit. That would be a disservice to these respectable beverages. I decided to make the classic beer cocktail, the Black and Tan. Using the Samuel Smith Organic Chocolate and Tröges Dream Weaver; what came out was a collaboration of chocolate, lemon and banana. It actually reminded me of a beer chocolate shake. The light hints of pepper complimented the chocolate very well. Preparing more than two cocktails, it was clear these two beers created a delicious match worth remaking time and time again. I hope you enjoyed National Beer Day (and weekend). As always, drink responsibly and have some fun!

VINTAGE FLOWS: "YOU ARE THE WINE SNOB YOU HATE"