Beauty. To me it means one thing, to someone else it means the same, but to the person next to them or across the world it can mean the complete opposite.

When it comes to a woman’s beauty, the topic can become very controversial. With me experiencing beauty hands-on as a makeup artist, I know that no matter what kind of woman you are, the views of being “beautiful” varies and can contradict others views of seeing it the same. The important question is, where do we get the definition of beauty in the first place? Yes, the dictionary of course, but on some level we’ve done away with that and put a face completely different than the real meaning.

“1. The quality present in a thing or person that gives intense pleasure or deep satisfaction to the mind, whether arising from sensory manifestations (as shape, color, sound, etc.), a meaningful design or pattern, or something else (as a personality in which high spiritual qualities are manifest).

2. A beautiful person, especially a woman.”

Some individuals might feel differently toward this definition. Beauty can be easily altered with just one click at a time, by turning the most natural looking woman into a completely different person. A recent independent project known as Before & After by reporter, blogger and social media enthusiast, Esther Honig, shows the capability of what the editing-software, Photoshop, is capable of doing with the simplest portrait. It is fascinating how it is able to manipulate images from everything and anything, not leaving a single detail behind.

This project intrigued me from the moment I came across it, as it has become internationally known since its debut. Curiosity of others interpretations on various things, has always interested me. Especially for beauty, which has become one of the many gateways to view before my eyes. Esther sent one simple portrait of herself to different artists to be altered towards what beautiful means in their country. She has received images from 25 different countries such as Romania, Germany, Argentina, Kenya, Australia, Greece, Pakistan and the list goes on. 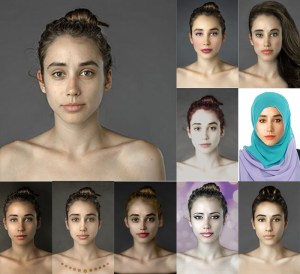 Maybe you have heard of a project like this that has been done before, or maybe not, but the thing that matters in this situation is that Before & After has impacted others by becoming one of the most talked about subjects from the worlds biggest publications. Yes, that’s right, more than one!

I consider myself privileged to have been given the opportunity to learn what has made this project what it is, as well as getting to know a little bit more about Esther during an interview.

Initially, Before & After, was only to be published by one or two blogs. “It seems I’ve unintentionally cracked a code to going viral and the experience has been both wonderful and difficult. Managing a relentless surge of press inquiries and interviews was one of the most difficult challenges I’ve faced. On the other hand I’ve been featured by publications that I’ve idolized for years,” she says. This can definitely be something difficult to deal with when the goal wasn’t initially to make it as big as it has become, but to take the world by storm like this is just a sign that Esther’s idea has sparked something in all of us.

She came up with the idea when her boss at the time, at her former day job as a social media manager, showed her an international freelancing platform known as Fiverr, where freelancers are contracted all around the world. Seeing this as an opportunity for her own social experiment, the early stages of Before & After began. “I wanted to explore Photoshop as a symbol because it’s become such an accepted facet of our society. Even basic alterations have become a familiar part of our visual landscape. Today there is growing understanding that what you are looking at online and in print has been manipulated,” says Esther.

The lingering question though remains, what is beauty to her? “To me authenticity is the most complete expression of beauty. Aesthetics become less valuable when we consider humans for their honest state of being,” she shares. Interestingly the look that she liked the most has been the one from Morocco, where she was dressed in a hijab as the artist’s expression of beauty. This brings in, not only the woman in the portrait, but the religious customs that is the most honest state of being, of Muslim countries. To me, that is beauty too.

Acknowledgement of this project’s creativity cannot be forgotten to be given to her sister, Peregrine Honig. Peregrine is someone that Esther has been inspired by, for years, even before she discovered who her favorite writers and journalists were. She is the person who titled Before & After and is an established artist based out of Kansas City. Her continuation of success within her career has helped Esther with the guidance she has needed for many of her ideas within many of her projects. “…Peregrine’s resourcefulness and tact have helped her to achieve success in her career and a tight community of friends and supporters. I can only hope that someday I might enjoy such accomplishments in my own life,” Esther tells me and without a doubt I believe she is completely on the right path.

Esther’s success doesn’t stop with this project of course. She has touched upon fields of work such as radio journalism, print journalism and social media. Currently, her blog Synapses explores the aspects, current research and her own personal experience as the daughter of a man who was diagnosed with Alzheimer’s in 2009. Although she has had practices in other parts of journalism she finds that blogging fits her best with her writing style and has helped her get through things in her personal life. She is also currently working as a freelance reporter for the NPR station in Kansas City, KCUR, and has been able to explore many different parts of reporting due to the fact that she also speaks Spanish.

Being bilingual has opened many doors for Esther. It is a valuable asset to have when today’s job market becomes challenging. A year ago she had the privilege of serving as an international microfinance organization, Kiva. With no experience in finance, economics or project management she was still chosen because of the Spanish-speaking environment that had to be covered. Being bilingual, like the given opportunities that Esther has experienced, opens endless doors.

So what is next for this multi-talented beauty? For starters, this will excite you readers just as much as it has excited me; there will be a part two of Before & After. She has received a countless amount of unsolicited Photoshopped images from all over the world that has expanded her collection significantly and sharing it with the world would be completely necessary since she has us already hooked on her work. Another project mentioned, that sparked my interest, is having a separate collection predominantly of Muslim countries that have the similar ways of dressing, like her favorite portrait from Morocco. A very interesting conversation can be easily started and if the project comes to life the results will be fascinating.

“My contributions are mainly human interest but cover a wide variety of subjects from technology, culture and local history,” she tells me and since she can really do it all, what ever she chooses to show everyone next will continue giving us that spark that Before & After keeps giving.

For more information on Esther visit her website http://www.estherhonig.com and her blog http://synapses331.wordpress.com