This Is Not A Muslim Vs. Jewish Problem

Politics and Business
I’ve been mulling this piece on the current Middle East conflict for a few days. Even right now, I’m staring at my phone, looking for answers to the questions posed by the world we live in. Missing a few soft deadlines has only put more pressure on the words that will soon fill this article. In the few days i’ve waited, nothing has changed. As Alfred Pennyworth told Bruce Wayne in ‘The Dark Knight, ‘Some men just want to watch the world burn’, and that is exactly what the world has been doing for the past few weeks.
Social media has changed the landscape of the world we know as journalism.
It is not about the great interviews, amazing camera angles, and hard hitting questions anymore. As film has slowly gravitated towards ‘found footage’, while news has been taken over by the need for the ‘real’. We want shaky cameras, NSFW ground zero images, and up to the minute death tolls. We don’t want them because we are gruesome, we want them because we are over being given ‘Hollywood-esque’ news coverage. These past few weeks have shown that our generation is not going to be steamrolled into a direction because mainstream media says so. This is why journalism has changed. If you have a smartphone with an internet connection, you are a journalist. This is not to take away from those who have strived to finish their schooling and go through accredited programming. As the world spirals, there is a definitive need for the truth. Sugarcoating politics that meander the reality of the situation are no longer cutting it for us. And we are not happy about it.
Gaza has been the focal point of mass destruction over the course of years, yet the polarizing picture of a people on the path of extermination has overtaken all of our social network feeds. It has gotten to the point that if you flip through any news source during a prime time slot (not that anyone really watches television anymore), you will see someone giving their opinion/take/two cents on the crisis abroad. The tallies have racked up over 1900 deaths (the majority civilian), with no real end in sight. Israel has made it a point that it wants to teach Hamas a lesson, based on a rumor (at the time it was an absolute truth) that three kidnapped boys were killed for being Israeli. In between the 1300-1400th (that is our new measure of time) death, there was an official statement from Israel that these boys were NOT killed by Hamas. Let that sink in for a second. The cause of aggression then shifted to rockets being launched, which is yes, wrong. But does it yield 50,000+ mobilized troops to drown out a few thousand ill equipped, ill trained, ill taught, angry soldiers? No. The world is watching, reading, and scouring news feeds on Twitter, Facebook, and Reddit. It is impossible to feign ignorance on a matter that is happening in front of our very eyes, regardless of how far it is. Our generation is not limited by distance. 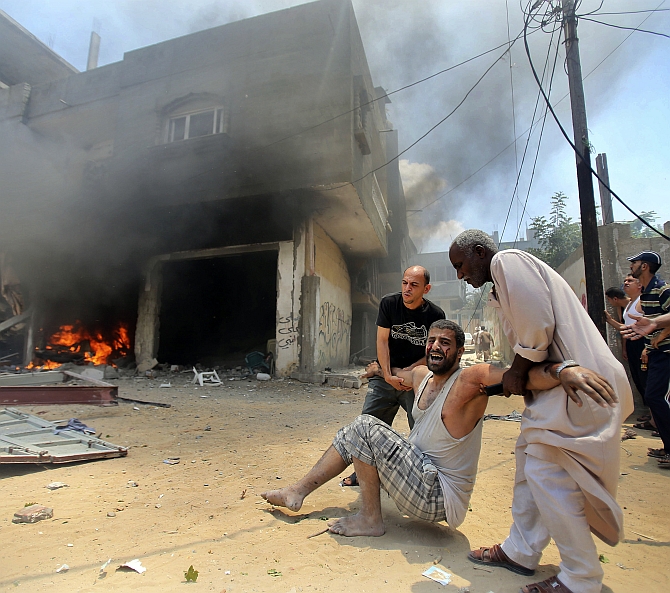 The issue has to be changed
This is not a Muslim vs. Jewish problem. This is a world problem. No one supports the death of Christians and Shiites in Iraq by ISIS. No one supports the death of non Assad supporters in Syria (we are approaching 200,000). And no one supports clashes in Israel/Palestine. The focus has to be changed from what country should exist, because surprise, they both do. You want to call Israel an illegal settlement, or Palestine non-existent, do it. But remember, these people are NOT make believe. They all exist, breath, and share a common culture. If you’re dialogue isn’t changing, then nothing will. With the increase of visibility, it is not a clear cut vote for a particular side, but the end of hate, genocide, and ignorance. No one should have their home destroyed, family murdered, or live in constant fear of bombing. We have it easy here. And we should not just accept that, but use it to better other people’s lives. Recently, I teamed up with New York based publicist Jenan Matari on a project entitled ‘I Write To You As.’. This project is a collection of prose, first hand accounts, and posts from not just Arabs, Muslims, Jews, and Israelis, but everyone. It is a conversation of our hope for peace, love, and some sort of tranquility. This is what our generation should be known for; ending the old diatribe, and beginning a whole new one. One that involves all of us, together, and on the same page. For once.