He stands, drink in hand, away from the busy red carpet, surveying the room and making sure his friends are taken care of. We chat, make jokes, and watch the coveted party fill up. People arrive slowly, and then, like a flood, the place is packed. This isn’t just a Treats Magazine party; it’s the first night back for Robin Thicke after his “historic” 2013 VMA performance with Miley Cyrus. 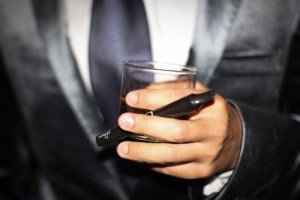 And this isn’t just anybody to my right. It’s my friend, James Monsees, who is the co-founder of Ploom, which sponsored the night’s event. He isn’t alone. Not too far away is Marketing Director, Sarah Richardson, and Marketing Manager,Lauryn Livengood. The faces of the fast-growing vaporizer company, Ploom.

Ploom isn’t just any other cookie-cutter start up. In this ever changing platform of technology, it takes a lot more than one charismatic individual to make a dream enticing. It takes a formula.

In a small room in a Palo Alto house, Ploom began as a master’s thesis, a project formulated between Monsees and Adam Bowden. A few years after sparking the idea, Ploom has become the closest a vaporizer will come to an Apple product. The rest can be easily found at Google, but what the search engine won’t tell you is how this company wasn’t built by some genius, one-man show, but rather, by a family.

Whether it’s at the coveted Pax cabin at Sundance, or the launch party in downtown NYC, egos are left at the door. Any sense of self-entitlement disappears just as quickly as the puff of smoke released from the flagship Ploom. This is how a brand is made. It isn’t about one person with an idea anymore, as there have been enough of those. A start up has to be unique, fun, and connect with its target audience in all the right ways.  The product, they say, is as good as the people who make it. Those words hold just as true for Ploom.

As we move forward in this ever prospering society filled with technological advances and changing trends, new products really have to wow our generation in order to grab our attention. Not solely in terms of what they do, but also how they are presented to us. Steve Jobs understood this. Gen-Y likes the appearance of sleek. We like sexy aesthetics.

As Don Draper would say, we want to feel a sense of naughtiness holding the product, as if we are, in some way, cheating. And just as we like to be pleased, we are curious about the folks behind it. We want to interact and know these people personally; that’s the key to connecting with the Generation-Y audience.

Some newly emerging start-up companies fully understand the importance of a genuine, personal connection with the audience. Young teams with fun people, playing foosball during breaks in offices, combining creative forces and sparks of genius, and unwinding with Friday drinks, accompanied by Ploom products of course. This is where innovation breeds. In environments conducive to creativity, thinking outside of the box, and being one’s self. Everyone is the face of the company. Everyone is a representative of the culture. Everyone is valued. Nowadays, it’s not one kooky personality that sells a company, but the people who hold it together.

The event is a hit, with celebrities weaving in and out, gingerly puffing from Ploom products, and taking pictures. Robin Thicke performs, and the crowd goes wild. Forget dusty garages, dull boardrooms, and immature dorm rooms. This is how a start-up parties, and this is a how a brand is cemented.