Punk Your Chucks – The Artistry of MAG

Who doesn’t long for customized one of a kind hand painted Chuck Taylor’s, Vans, Air Force Ones, totes, heels, or clothing? Rarely do we have the fortune of coming across artists capable enough to be able to deliver an entire vision on apparel, but when we do, there is no letting go. Punk Your Chucks has and continues to be one of the most sought after brands of its kind as a result of bringing visions to life through the artistry of Matt Gomez, also known as MAG, the talented artist behind the genius of the line.

After his parents divorce during his adolescent years, MAG lived in New York City with his mother, while his father decided to live on and off with the Ahwaneechees, a Miwok Indian Tribe in Yosemite Valley. Growing up in an atmosphere with no father figure, a mother continuously working while attending college, and a sister whose time was spent predominantly with friends, MAG grew up despondent and detached, seeking more. As he began to lose interest in school, MAG’s attention began to flourish towards museums, libraries, and zoos. Spending hours upon hours wandering around the halls of museums and cultural institutions to escape the real world and divulge in a more surreal world, MAG’s attention magnified towards the world of art. Even though his mother was an avid sketch artist, oil painter, and poetry writer, his rebellious side continued to distance himself from the home front, drawing his attention more towards graffiti art, sketching, painting, and sculpting whenever and wherever he felt like it. Inspired by artists such as Picasso, Pollock, and Georgia O’Keefe, it was Andy Warhol’s work that gave MAG a grasp of the ingenious yet shrewd reflection on the American culture and modern art. Regardless of what renown artists inspired him growing up, today MAG’s biggest inspiration is his daughter.  A gifted artist herself and a second year scholar student at the School Of Visual Arts in New York, Gabrielle has taken after her father’s footsteps. 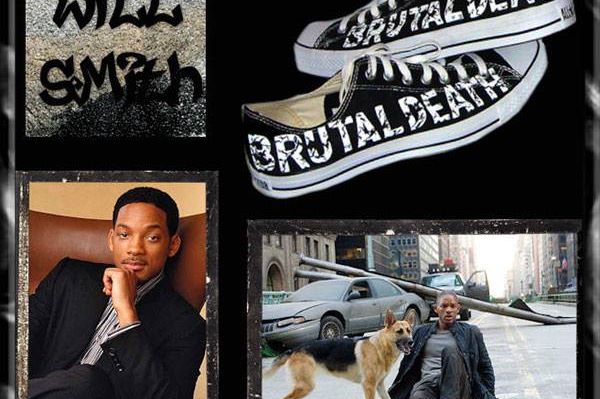 Taking the customization of Punk Your Chucks exclusivity to the next level, hand painting each and every item, MAG’s attention to detail bleeds through the brilliance of his work. After every new pair, the first thought that never fails to cross his mind is that it is his best pair he has created yet, but that thought only lingers around until the next pair is complete. Being the go to guy for many in the world of entertainment, MAG’s friends like drummer Chad Szeliga rely solely on him to personalize each and every pair, knowing that nothing can compare to it. With a client list ranging from bands and artists such as; Nickelback, Motley Crue, Def Leppard, 3 Doors Down, Black Label Society, Will Smith, Samuel L. Jackson, Mira Sorvino, Alexa Ray Joel, along with many others, the popularity of Punk Your Chucks continues to flourish day by day.

Since creating custom anything is inherently limiting with only so many hours available in a day to be utilized to paint pieces, MAG’s essential goal is to create collaborations between Punk You Chucks and numerous other avenues within the industry. Currently working on the pre production stages of new video webisodes along with his webisode team and sponsors; Justin Reich, Ali Abouomar, Liquid Lightning Energy Drinks, and Dolby Laboratories, MAG’s webisodes will be featuring band and celebrity interviews behind the scenes at concerts and events, instructional DIY segments teaching subscribers how to paint their own shoes and apparel, and much more. Not only are webisodes in the bright horizon for MAG, but a Punk Your Stuff Rockin’ Road Store is in the works to bring custom products upon release to the streets of the US and Canada for clients. Between limited autographed merchandise and custom apparel, Punk Your Chucks will soon be hitting the road and going on tour to a city near you!