As she sat in the back of the classroom, carelessly tapping her eraserless, chewed-up pencil on the laminated wooden surface of her desk, the pre-I.B. English teacher of Gulf High School continued her mind-numbing lecture on the Odyssey by Homer. As the antiquated clock spoke above the teacher’s head, an eternity passed by with each painful tick.

However, forgiving freedom suddenly waltzed in as the class bells let out a terrifying shriek as a gift for those waiting and an inconvenience for those sleeping. The girl hastily packed her minimal school supplies and shot for the door.

“Wait,” the teacher stated sternly to the girl, who paused with irritated patience as well as the rest of her dull-witted, apathetic peers. “Make sure you read and annotate Lord of the Flies by next Monday.” And, from that inconvenient, procrastination-worthy assignment launched the girl’s three- to four-year obsessive adventure of reimagining William Golding’s frightening and maddening tale. 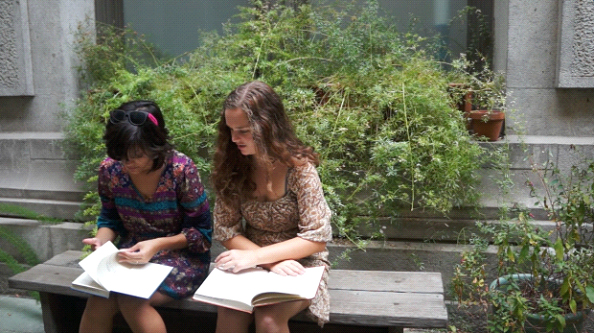 Gilmar, to the right, and Kirves, to the left, taking part in one of their most enjoyable activities: reading.

Paige Gilmar had always acquired a fascination for literature, finding inconceivable joy and cheer from the images that were woven so intricately by some of the western world’s greatest authors. Her long-term friend, Stephanie Kirves, felt similarly, allowing a connection to blossom between the two as they both found similarities in their literary pursuits, especially Lord of the Flies.

Though both Gilmar and Kirves initially dreaded the assignment, as all students do, when the yellowed and torn pages of Gulf High School’s rental books fell into their hands, they were captivated by the dark philosophies and warped perspectives that Golding acquired within the novel. The intricately detailed story and the use of captivating symbolism made this narrative one that visited and revisited their thoughts daily.

Nevertheless, as amazement fell upon these students, so did disillusion. Though enrolled in one of the most advanced academic courses in the American education system, Gilmar and Kirves found that their peers not only felt contempt for Golding’s novel, but literature altogether. The intellectual bubbles they had preserved so affirmably would not be popped, especially by something so “mundane” as a social commentary. Such apathy had not only fallen upon Gulf High School, but the generality of the North American populous.

Be that as it may, Gilmar and Kirves did not let their disillusion metamorphosize into depression. In order to reinvigorate the literary apathy and dispassion of their generation, both students organized and founded Paper Men Pictures, a film group dedicated to bringing startling and vivid life to the classic words on the printed page through truthful cinema. 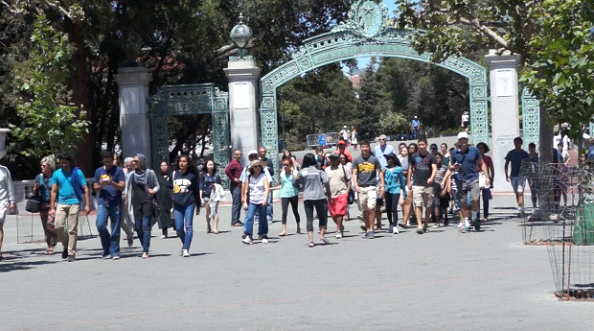 A prominent landmark located between Sproul Plaza and Strawberry Creek located at the center of University of California–Berkeley’s campus.

Paper Men Pictures has begun to commence its first-ever project, the film adaptation of Lord of the Flies. Though adapted as a film in 1963 and 1990, both Gilmar and Kirves agree that the directors fail at truly encapsulating Golding’s belief of the innate evil that lies within man.

As stated by Kirves, “The two movie adaptations, quite frankly, don’t do justice to Golding’s prodigious work. Harry Hook’s film (1990) makes so many mediocre changes that the novel’s inherent messages are obliterated, while Peter Brook’s (1963), though quite good for its time, is lacking Golding’s prolific symbolism and exploration of psychological undertones. Paper Men Pictures is emphasizing Golding’s innate symbolism, which will add many more layers of meaning to the intricate tale; also adding “flashbacks” and “flash-forwards” to further the exploration of characters and thus Golding’s complex assertions about human nature. Through this project, we yearn to not only make Golding proud by accurately presenting his profound thoughts through colorful and powerful cinema, but also to inspire students and people of all ages to better appreciate the literary classics which are so integral to our society and history.”

Though still entertaining, Paper Men Pictures seeks to emphasize a great deal of literary devices that are often undermined by Hollywood filmmakers. “We seek to tell Golding’s tale in an honest and sincere way. All the motifs, symbols, themes and more should be rightfully emphasized as that’s what makes these stories so unforgettable. It is through this project that we hope to create a piece of art that will not only bring justice to Golding’s faded words, but hopefully inspire viewers to revisit these lost pages in order to fully understand the story’s powerful message,” Gilmar says.

Gilmar and Kirves have already began to form affiliate programs with some of the film schools based in California, D.C., New York, and Florida. With such promotion, the network for Paper Men Pictures continues to build increasingly, allowing for a network of book-loving and movie-obsessing film and drama students to form. “This coalition we are forming throughout universities and schools allows students to not only use their skills in their given departments, but sharpen them as well,” Gilmar stated.

In spite of their successes, obstacles remain a constant for this dynamic duo as this project is to be a costly endeavor. Gilmar and Kirves plan on filming the remake in its 1963-original location, Vieques, Puerto Rico. However, besides all the items that are needed for a successful film, such as film equipment, costumes, and props, room and board must also be provided for the participating members of Paper Men Pictures.

As stated by Kirves,”Unfortunately, without sufficient funding our project will not become a reality. People often underestimate the expenses of production, but the costs of costumes, props, equipment, first-rate editing software, filming permits, and room and board for both an extensive cast and crew can quickly drive any filmmaker into debt. We will be launching campaigns on Indiegogo in an attempt to fund our project; also pursuing sponsorships with both film companies and local businesses. Consequently, our success is dependent upon the support of the public.”

Gilmar and Kirves have already created a funding campaign on Indiegogo, a global crowdfunding platform where they hope that their three- to four-year dreams of creating this film will come true. “It is imperative that we acquire funding from sponsors as that is what will really make or break the quality of this film,” Gilmar admits. “As we have worked on this for nearly four years, it would be emotionally damaging to watch these dreams shatter.”

Gilmar and Kirves are continuing to round up film crew members throughout the year and hope to initiate casting in late October. Both hope that by the beginning of the summer of 2016, the entire cast and crew of Paper Men Pictures can begin rehearsing and then filming. 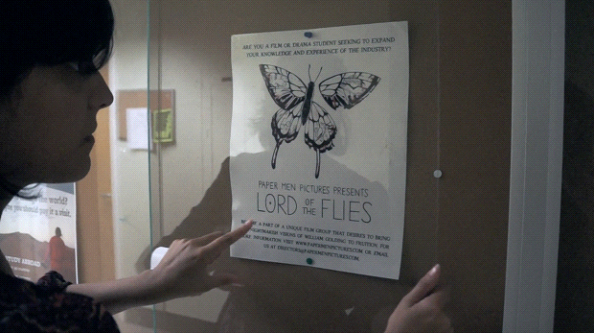 Gilmar taping their film poster on the announcements board in University of California–Berkeley’s Department of Film.

Kirves goes on further to state,“We will be filming on location on the stunning island of Vieques during the summer of 2016, the very place Brook’s adaptation was shot. The still largely uncultivated island practically screams Lord of the Flies; the scenery being the one thing predominantly successful in Brook’s film. As well, we will be shooting the scenes which take place pre- and post-island up in historic Hamilton, Ontario. As we are strictly sticking to the time period of Golding’s masterpiece, our locations in Hamilton will successfully endow the production with a resplendent 1950’s air.”

If you are willing to support these brave and tireless souls in their artistic pursuits, visit their Indiegogo fundraising campaign at www.indiegogo.com/projects/lord-of-the-flies-the-strangers-within/ and donate. If you are a student interested in joining this wondrous group, stay updated and visit their website at www.papermenpictures.com or like their page on Facebook and follow their Twitter @ofthepapermen. For further inquiries on the project, ask the founders themselves at directors@papermenpictures.com.

As stated by Gilmar within their Indiegogo promotional video, “Keep our dream of beasts and butterflies alive and support Paper Men Pictures in its creation of Lord of the Flies for 2016! Thanks so much for watching, and we hope you have a great day!”