Perry’s recent round of tours offers something for everyone. While not all will buy in on the theatrics, all will leave with something to talk about. Whether you’re a die-hard fan or just along for the ride, brace yourself for the world of Prismatic: a theater of exploration and the visually outrageous; a carnival of easy summer fun, where the mind meets whatever hits the imagination. 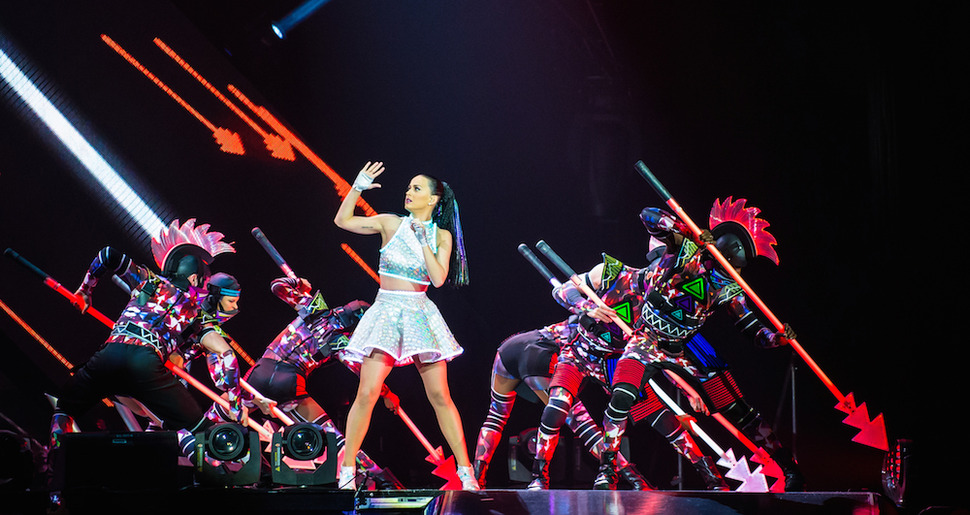 Perry’s concert reflects her love of all things fun. The Philadelphia stage included a treadmill, which Perry and her dancers utilized mid-song and dance. Other ‘Prismatic’ props include: glow-in-the-dark jump-ropes during “Roar,” Perry’s LED-lit dress, dancing gladiators, an inflatable balloon-dress, dancers spinning from diamond-shaped cages, a sheet that covers the crowd, and fire.

With set-changes every third song or so (and of course, bold costume design), Perry’s songs appeared grouped by their sound. From a galactic group of performances surrounding “E.T” to a mix of 90’s songs coupled with “Walking on Air,” witnessing a Perry show is much like attending 3 concerts for the price of one. Look out for the pleasure-inducing “This Is How We Do,” accessorized with a pink car for Perry and her dancers, and a festive backdrop of blow-up Chanel, wine, and “Katy’s Taco.” 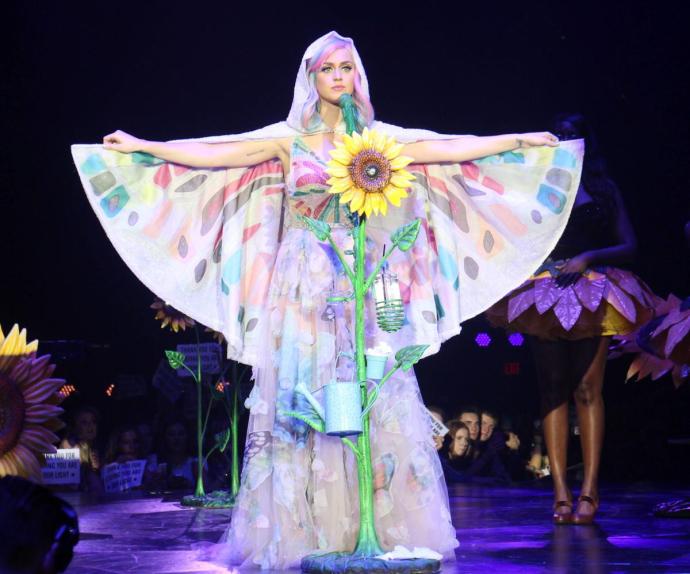 Perry takes command when walking into a room, her dancers often setting up the vibe on stage while she follows behind. She begins the show coming out from an actual glass prism, then mounts herself on a fake horse for “Dark Horse,” where she dons Cleopatran attire and takes a turn swinging from the diamond-shaped cage during “E.T.”

Perry lets her personality shine through with videos of cats in cars jamming to Snoop Dogg’s “Gin and Juice.” Unafraid to add in a stitch of the bizarre, she wears a pink kitty suit while her cat-suit dancers sit on enlarged cat posts. Soon, the cat-clad performers join Perry down the stage-runway, posing to Madonna’s “Vogue” and drinking from a “milk stand” that explodes glitter-powder.
Other Perry antics: She eats a cheesesteak on stage, randomly discusses the plants she grows in her garden, and asks a fan to take a selfie for her. 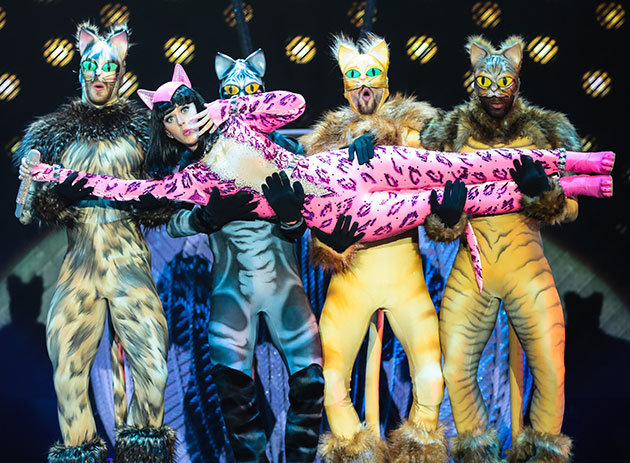 At one span of the evening, a floral umbrella opens from the center of the ceiling, the room transforming into a serene escape. Perry bares her soul, explaining her desire to bring “hope, joy, and fun, because we know life sometimes is hard.” Performing “Grace of God,” “Unconditionally.” and a blend of “The One That Got Away” with “Thinking of You,” Perry showcases her voice and acoustic guitar skills.

Perry doesn’t just talk to the crowd; she shouts. Her youthful declarations to “love yourself” and “be in the moment” amp up the crowd, showing she wants them to have the good time she’s having. The show starts off dramatically, slows for forty-five minutes, then brings you back to a heart-pumping state of vitality. If you leave after the encore song, you’ll still hear her start the next piece, going and going like an Energizer battery. If you’re looking for a performer to put on a show, you’re in good hands with Perry.